Power in Physics is defined as the time rate of the amount of energy converted or transferred. In the SI system (or International System of Units), Watt (W) is the unit of Power. Watt is equal to one joule per second. In earlier studies, power is sometimes called Activity. Power is a scalar quantity. Power is always a function of Work done, therefore if a person works at a variable rate depending on the time of day, his power will likewise vary. The idea of Average power enters the picture at this point. Let’s study Power, average power, unit, and formula in this Article. 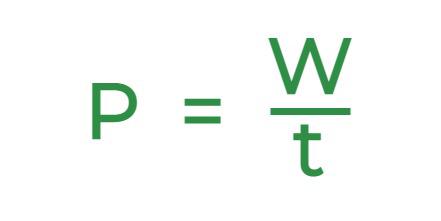 Power is a physical quantity that is a measure of energy transfer rate. Therefore, it can be defined as the rate at which work is done with respect to time.

Hence, Power is the amount of energy consumed per second. Power can also be defined as the quantity of force required to cause a unit displacement. Power is a scalar quantity and is denoted by P.

For example, a bulb with a higher power or wattage, like 100 W, illuminate more light than a light bulb of 10 W. Thus, this implies that more energy is illuminated by the bulb consuming more power.

Power is defined as the time rate of work done by the object, then, mathematically this can be given by the power formula as:

W is the Work done,

t is the Time for which work is done, and

P is the Power gain or loss.

Hence, the above relation of Power is called work-time equation

Work done (W) by an object can be defined as the product of force and the displacement of the object, then the power formula in terms of force is given by-

F is the force required, and

s is displacement of the object.

Hence, the above relation is known as force-velocity equation

A Watt is defined as, when a body does work of one joule in one second it is called One-Watt Power.

Average Power is defined as the ratio of the net (Total) work done in the total amount of time. Thus average power is given as,

Pav is the Average Power,

ΔW is the Total Work Done, and

ΔT is the total amount of time taken.

In case when the rate of work done by the body is uniform or constant then the average and instantaneous power become equal.

The rate at which energy is changed from the electrical energy of moving charges to another form, expressed as a rate, per unit of time, is known as electric power.

Mathematically, electric power is defined as the product voltage and the current flowing, given as:

P is the electric power,

I is the current flowing,

R is the resistance and

V is the voltage.

The Energy consumed or power consumed is generally measured in Joules or kilowatt-hours (kWh),

Example 1: A boy pushes a box of 20 kg up to a distance of 5 m for 10 seconds. Calculate the power delivered to the box.

Example 2: A pump is required to lift 500 kg of water per minute from an 8 m deep well and eject it with a speed of 25 m/s. Calculate the power of the pump.

Example 3: An elevator is designed to lift a load of 500 kg through 5 floors of a building averaging 3 m per floor in 5 seconds. Calculate the power of the elevator.

Example 4: A force of 5 N is required to move a body on a frictional floor with a constant velocity of 5 m/s. Find the power generated by the force.

Hence, power generated by the force is 25 W.

Question 1: Can the concept of power help us describe how objects move?

Work done and time are connected in the power equation. Since forces may move objects and we know that forces perform work, we might assume that by understanding the power, we can gain insight into how a body moves through time.

Question 2: What is Power in Physics?

Power is the amount of energy consumed per second. Power can also be defined as the quantity of force required to cause a unit displacement.

Question 3: How to find Power?

Power can be determined by the formula:

Question 4: What is the difference between Power and Energy?

Question 5: What happens to a body on which work is done?

Effort on a body equals an increase in the body’s energy because work delivers energy to the body. If the applied force, on the other hand, is in opposition to the object’s motion, the work is regarded as negative, suggesting that energy is withdrawn from the item.