In PostgreSQL, The EXIT statement is used to terminate all types of loops like unconditional loops, a while loop, or a for loop or terminate a block of code specified by the begin..end keywords.

We can use the exit to terminate looping statements using the following syntax:

If we analyze the above syntax:

Both of the above are optional. We can use exit with a condition like:

Without using the condition in exit, we can rewrite the same code using the IF statement as:

Suppose we a have loop that is used to print all numbers from 1 to 10. We can use the EXIT statement in the following manner to limit printing the numbers up to 7 only. 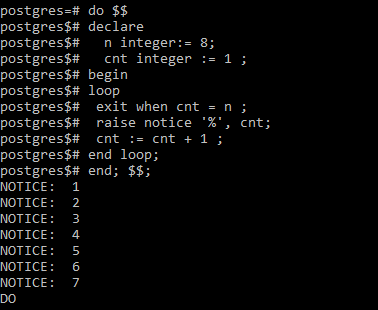 In the above example, we terminate our loop as soon as the value of our cnt variable reaches n(here 8) and thus, only values up to 7 are printed.

Using EXIT to exit a block

We can then the exit statement to terminate a block of code specified by the begin..end keywords. In this case, the exit directly passes the flow of the program to after the end keyword, thus ending the current block.

Using this syntax, we can terminate the block of code prematurely, thus preventing the statements after the exit to be run.

The following example shows how we can use EXIT to exit a block. 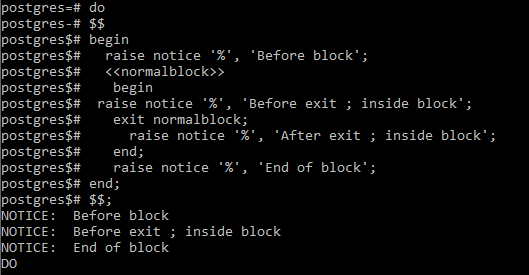 In the above example, the statement after exit was not printed as the block was terminated using EXIT before the statement. Thus inside the block, only statements before EXIT were executed and after that, the flow simply passes after the block ended.