How It Works ?
K-Nearest Neighbors is one of the most basic yet essential classification algorithms in Machine Learning. It belongs to the supervised learning domain and finds intense application in pattern recognition, data mining and intrusion detection.

The K-Nearest Neighbors (KNN) algorithm is a simple, easy-to-implement supervised machine learning algorithm that can be used to solve both classification and regression problems.

The KNN algorithm assumes that similar things exist in close proximity. In other words, similar things are near to each other. KNN captures the idea of similarity (sometimes called distance, proximity, or closeness) with some mathematics we might have learned in our childhood— calculating the distance between points on a graph. There are other ways of calculating distance, and one way might be preferable depending on the problem we are solving. However, the straight-line distance (also called the Euclidean distance) is a popular and familiar choice.

It is widely disposable in real-life scenarios since it is non-parametric, meaning, it does not make any underlying assumptions about the distribution of data (as opposed to other algorithms such as GMM, which assume a Gaussian distribution of the given data).

This article demonstrates an illustration of K-nearest neighbours on a sample random data using sklearn library.

We’ve been given a random data set with one feature as the target classes. We’ll try to use KNN to create a model that directly predicts a class for a new data point based off of the features.

Set index_col=0 to use the first column as the index. 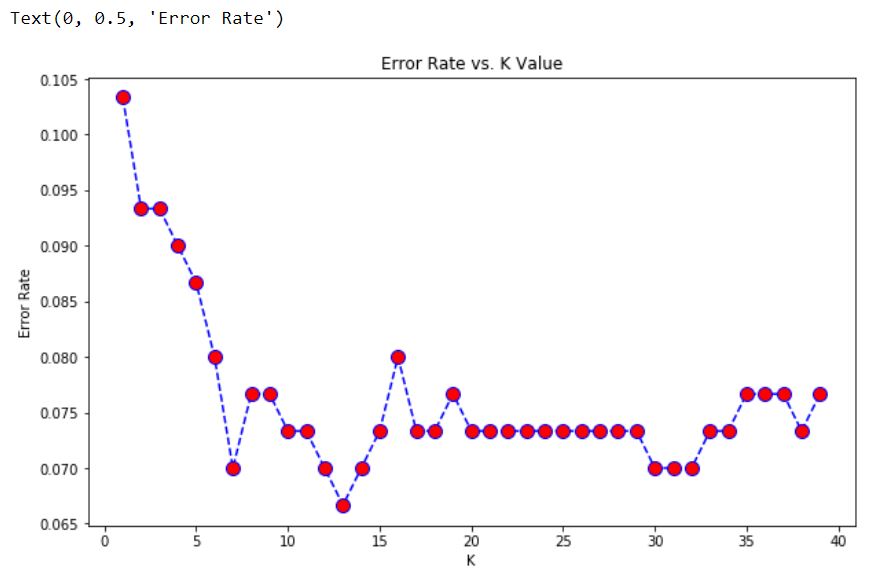 Here, we can see that that roughly after K>15 the error rate just tends to hover between 0.07-0.08 Let’s retrain the model with that and check the classification report.

Great! We were able to squeeze some more performance out of our model by tuning to a better K value.