IS-95 stands for Interim Standard 95 and is also known as CDMAOne. It was the first ever CDMA-based digital cellular technology and was developed by Qualcomm. It is an 2G cellular system based on DS-CDMA. To understand IS-95 we need to understand DS and CDMA separately.

DSSS is Direct Sequence Spread Spectrum Technique which is a spread spectrum technique in which the data to be transmitted is encoded using spreading code and received and then decoded using the same code. It is used to avoid interference, spying and jamming. The spreading code used is known to transmitter and receiver only.

CDMA stands for Code Division Multiple Access. It uses the same bandwidth for all the users. However, each user is assigned a separate code which differentiates the from each other. 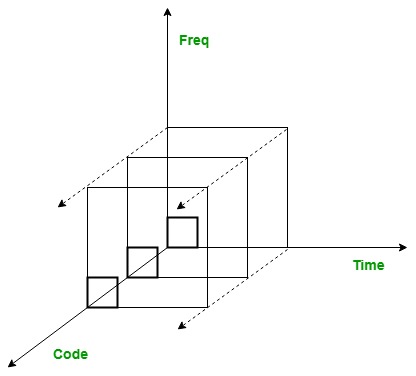 Narrow bandwidth signals are multiplied with a very large bandwidth signals called Pseudo Noise Code Sequence (PN code). Each user has its own PN code which is orthogonal to each other. Auto-correlation is maximum and cross-correlation is zero of these PN codes. They repeats itself after a very large time period and hence, appears to be random. PN Sequence is generated by Linear Feedback Shift Register.

It is of two types: