How to create frames ?

The task is to create frames using HTML. HTML is  HyperText Markup Language, and it is the standard markup language for creating web pages. It describes the shape of a web page and includes a sequence of elements.

Frames in HTML are used to divide your browser window into more than one section in which every phase can load a separate HTML report and a group of frames within the browser window is referred to as a frameset.

It is never recommended to use frames on your web page because of the following reasons.

Let us see how we can create a frame using HTML.

Example 1: The following example demonstrates the HTML <frameset> with cols attribute. The following code uses all of the above files i.e “frame1.html”, “frame2.html” and “frame3.html” as frames.

Example 2: In the following example, just change the cols to rows in the <frameset> tag. The codes for “frame1.html”,”frame2.html”,”frame3.html” are given before the examples. 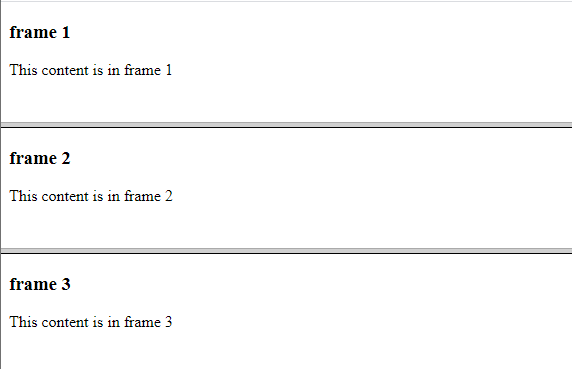