When you buy any milk, butter, ghee, cheese, cold drink, salt, sugar, spices, juices, flour, or anything, how do you guess that it is pure or not? Let’s take Milk for our example, Now tell me when you will say that your milk is pure? Being a normal person you will react like if there is not any adulteration done by the dairyman then, it is pure milk. BUT for Scientists, it is impure. Do you know why? Because according to them all these things are a mixture of different substances that can be of any element and compound like in the case of milk, it is a mixture of fat, proteins, and water. That’s why no manufacturer ever writes pure on these items.

What are Pure Substances?

Pure Substances are those substances whose constituent particles are the same in their chemical property or nature. Pure substances are a pure and single form of matter. It consists of single types of particles that can either be an element or a compound.

For example- Each and every particle of silver will show the property of silver.

What are Impure Substances or a Mixture?

Impure substances are those substances whose constituent particles do not have the same chemical nature. Impure substances are often known as Mixture. Mixtures are constituted by adding more than one kind of pure form of matter. It is made up of two or more elements or compounds that are mixed physically. A mixture can be separated into its constituents by physical process. Usually, energy neither given out nor absorbs in the preparation of a mixture. The composition of mixture always varies. The mixture is not combined together chemically.

For example- Air is a mixture of water vapours and different gases like oxygen, nitrogen, argon, etc.

If we see and notice all the surrounding things, we can notice that most of the things around us are a mixture of two or more pure components like soil, seas, and ocean water. They all are a mixture of different constituents.

From, the mixture of salt and water, we can separate both of them from each other by physical method. But we can’t separate salt into its chemical constituents as it itself a pure substance, and its composition is also the same throughout. Likewise, we can’t separate or break sugar granules into their chemical constituents as sugar is also a single pure substance. None of the soil is a single pure substance, whatever the source of the pure substance, it always will be similar distinctive properties like soil is a mixture of several minerals, nutrients, particles, impurities, organic matter, water, and air, etc. That’s why we can say that a mixture contains at least two or more substances that together combines to form a single mixture.

Mixtures are of two types- 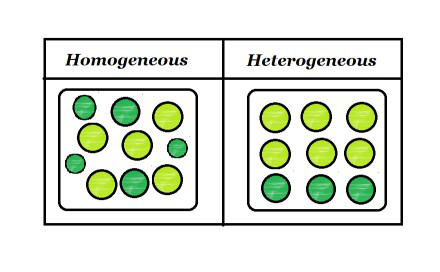 Composition styling in the mixtures

Homogeneous Mixtures are those types of mixtures in which the mixed components are evenly spread in the whole mixture. There is no partitional difference in the mixture. We can’t determine the mixture by only seeing it because its particles are not physically detectable. All Homogeneous mixtures are solutions.

In this kind of mixture, particles are physically distinguishable as they do not have uniform composition. These mixtures can be concluded just by watching. All heterogeneous mixtures are colloid and suspension. Mixtures in which substances remain distinct and one substance disperses into another substance in the form of small bubbles or in any form are called heterogeneous mixtures.

Difference between Homogeneous and Heterogeneous Mixtures

Question 1: What is the reason for the difference in properties of solutions, colloids, and suspensions?

Due to different particle size there is the difference in properties of solutions, colloids and suspensions.

Question 2: Classify matter on the basis of its composition.

On the basis of composition, matter can be classified into-

Question 3: How many types of pure substances are there? Name them.

There are two types of pure substances i.e. element and compound.

Question 4: Why seawater can also be called a homogeneous mixture?

Seawater can also be called as homogeneous mixture because it is a mixture of salt and water also from different view.

Question 5: Give the definition of solute.

Question 6: Which of the following is the major constituent of air in our atmosphere?

Nitrogen is the major constituent of air in our atmosphere.

Question 7: What is the tincture of iodine?

Iodine tincture is a weak iodine solution. It is a homogeneous solution.