Difference Between SAX Parser and DOM Parser in Java

There are two types of XML parsers namely Simple API for XML and Document Object Model.

SAX (Simple API for XML), is the most widely adopted API for XML in Java and is considered the de-facto standard. Although it started as a library exclusive to Java, it is now a well-known API distributed over a variety of programming languages. It is an open-source project and has recently switched to SourceForge project infrastructure that makes it easier to track open SAX issues outside the high-volume XML-dev list. The current latest version as of 01/10/2018 is SAX 2.0. It uses an event-driven serial-access mechanism for accessing XML documents and is frequently used by applets that need to access XML documents because it is the fastest and least memory-consuming API available for parsing XML documents. The mechanism SAX uses makes it independent of the elements that came before, i.e. it is state-independent.

DOM stands for Document Object Model. The DOM API provides the classes to read and write an XML file. DOM reads an entire document. It is useful when reading small to medium size XML files. It is a tree-based parser and a little slow when compared to SAX and occupies more space when loaded into memory. We can insert and delete nodes using the DOM API. 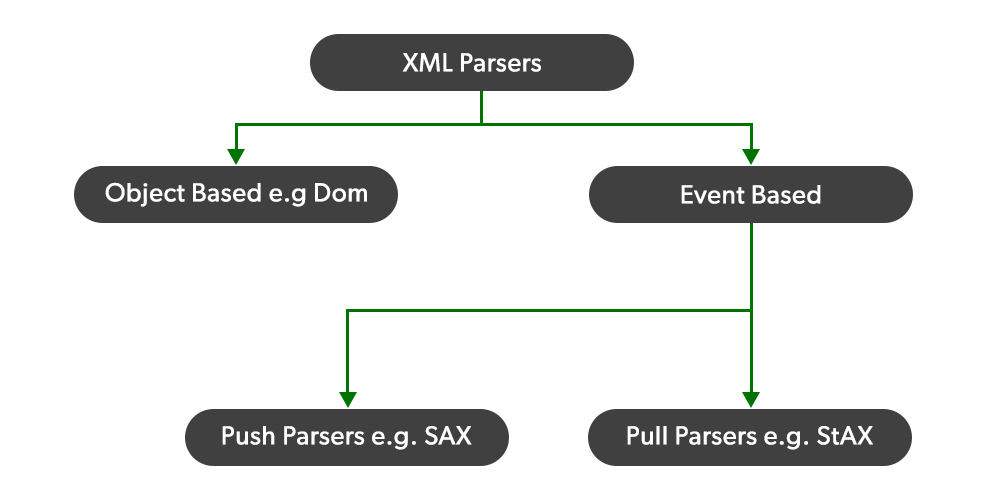 Now, the package that provides linkage applications for clients that work with an XML document is called an XML Parser. It was planned to read the XML documents. An XML Parser was created for doing programs to use XML.

SAX represents a simple API for XML and a SAX API is implemented by SAX Parser. This API was called event-based API which provides interfaces on handlers. There are four handler interfaces. ContentHandler, DTDHandler, EntityResolver, and ErrorHandler interface. It does not create any internal structure rather it takes the occurrences of components of an input document as events, and then it tells the client what it reads as it reads through the input document. It is suitable for large XML files because it doesn’t require loading the whole XML file.

DOM represents the Document Object model. When an object contains some information about XML documents, is called DOM Parser. This looks like a tree structure. DOM API is implemented by a DOM Parser, which is very easy and simple to use. It represents an XML Document into tree format in which each element represents tree branches and creates an In Memory tree representation of XML file and then parses it more memory is required for this.

Hence, conclusive differences between SAX Parser and DOM Parser in Java is as follows