To show how to deploy a nodejs app, we are first going to create a sample application for a better understanding of the process.
I have created a directory/folder “example” for my sample project.
Before procceding, make sure you have installed nodejs and git on your system.
Now, open the command line and cd inside the example(or whatever is the name of your project folder) directory
Follow the following steps to create the sample application for this tutorial
STEP 1: Create a “package.json” file using the following command 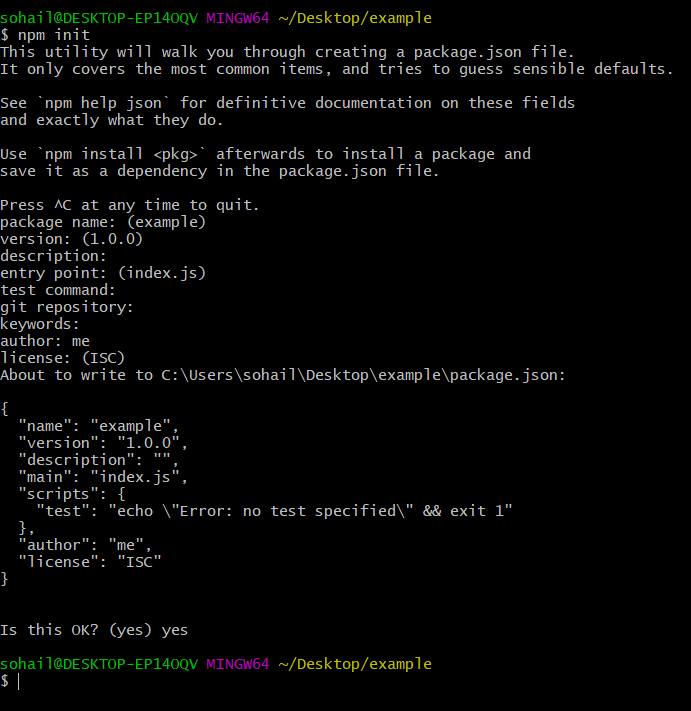 STEP 2: Create a file called “app.js” inside your project folder
STEP 3: Create a html file “head.html”
Fill the file with the following content
This will be the homepage of our app which is connected to another page via hyperlink.

STEP 4: Create another html file “tail.html”
Content of tail.html is

STEP 5: Open “app.js” file created in step 2 and copy paste the following code in it

Now, the above code displays the “head.html” file as the homepage which is connected to “tail.html”
STEP 6: Open the terminal again and write the following command to run the server

To see your application running, type “localhost:3000” in your browser as URL.
We have successfully created the sample application, we are now going to deploy it on the web.
There’s are many cloud platforms like AWS, Heroku, Digital Ocean, etc.

For this example, we are going to use Heroku since it’s easy to use and you can use it to test your apps for free. The free versions have some limitations thus if you want to use the site for commercial business it is recommended to get a paid package. Since this is a tutorial we gonna use the free version.
NOTE: ALL THE COMMAND ARE PERFORMED INSIDE THE DIRECTORY/FOLDER WHICH CONTAINS YOUR PROJECT
STEP 1: Go to https://www.heroku.com/ and register.
STEP 2: After completing the registration process, login and go to https://dashboard.heroku.com/apps
Before Proceeding any further, make sure you have installed the latest version of Git on your PC.
STEP 3: Go to Getting Started on Heroku with Node.js and download the Heroku Cli for your system.
You can check if Heroku CLI is successfully installed or not by typing the command

in the command line

Press any key to continue, it will open a new tab in your browser asking you to login in your Heroku account

( Heroku might not connect to Git bash, so use Command Prompt or terminal if it’s taking very long to connect i.e. if you were using git bash)
STEP 5: Now, make sure we are using Git in the top level directory of our app. We can check if the directory have Git or not by the command

To make it a git directory, type the command

(Ignore the warning for now)
Now, we need to commit the files we have added to git. Type

This will create a git remote which is connected to our local git repository
STEP 7: Type

to deploy the app on heroku server
STEP 8: After deploying the app
type

to make sure one instance of app is running
STEP 9: Type

this will open a app in your browser.
Now, you might be getting a screen like this

Go to command line and type

to check for error. It helps to debug the application. 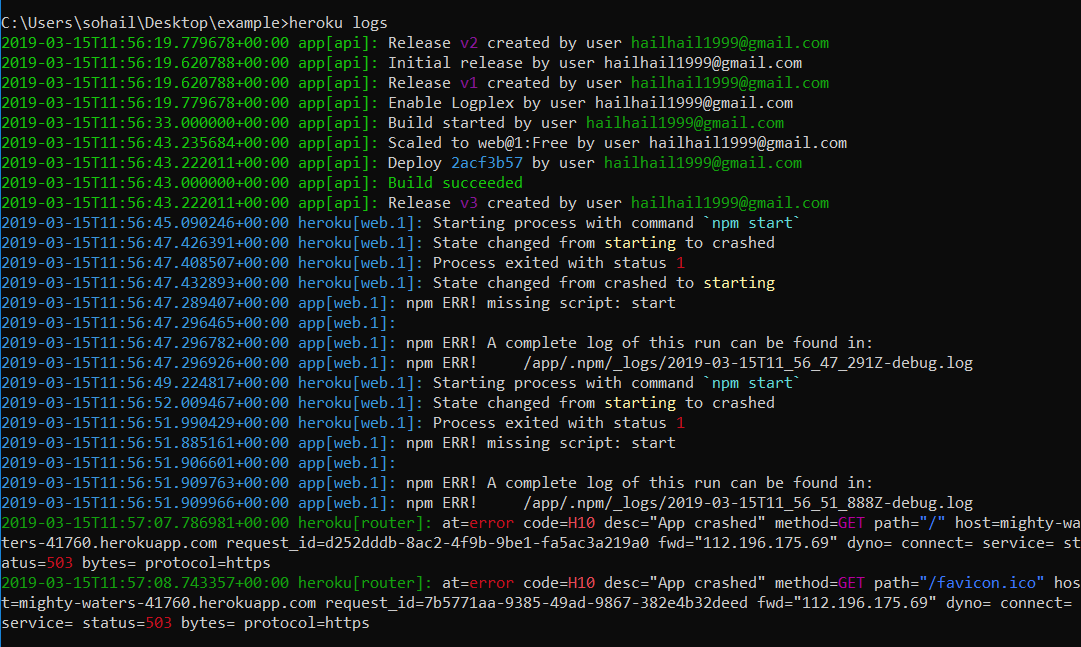 ( DON’T FORGET THE COMMA ‘, ‘ )
STEP 11: Type the following command in command line
We need to push the app to Heroku every time we make changes in it.

STEP 12: There’s still a problem.The problem is still not fixed. We are using PORT: 3000 but Heroku doesn’t. Heroku uses a dynamic port, we cannot fix it to 3000. If we want our application to work on Heroku we need to add the following line in the app.js file
.listen(process.env.PORT || 3000, function(…));
app.js will now look like this 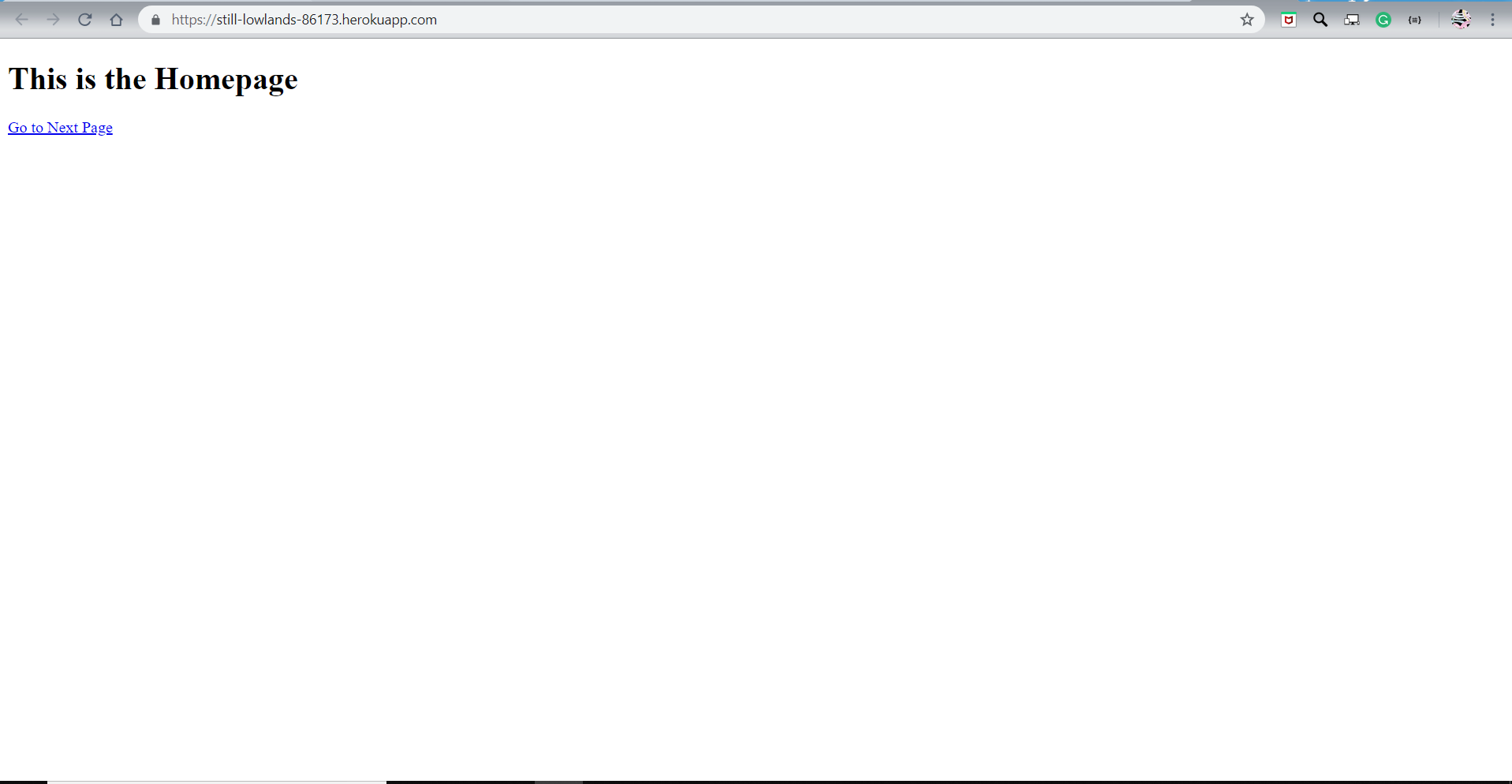 Congratulations, you have successfully deployed your first web application.
NOTE:
1. If your application uses MongoDB then you will have to deploy MongoDB server separately on some other cloud platform.
2. I was having some problem connected git bash to Heroku that’s why I switched to CMD in between. So, I recommend not to use Git Bash.