The ability to control the execution of a guest program in a completely transparent manner opens new possibilities for delivering a secure, controlled execution environment. All the operations of the guest programs are generally performed against the virtual machine, which then translates and applies them to the host programs.
A virtual machine manager can control and filter the activity of the guest programs, thus preventing some harmful operations from being performed. Resources exposed by the host can then be hidden or simply protected from the guest. Increased security is a requirement when dealing with untrusted code.
Example-1: Untrusted code can be analyzed in Cuckoo sandboxes environment.
The term sandbox identifies an isolated execution environment where instructions can be filtered and blocked before being translated and executed in the real execution environment.
Example-2: The expression sandboxed version of the Java Virtual Machine (JVM) refers to a particular configuration of the JVM where, by means of security policy, instructions that are considered potentially harmful can be blocked.

In particular, sharing, aggregation, emulation, and isolation are the most relevant features. 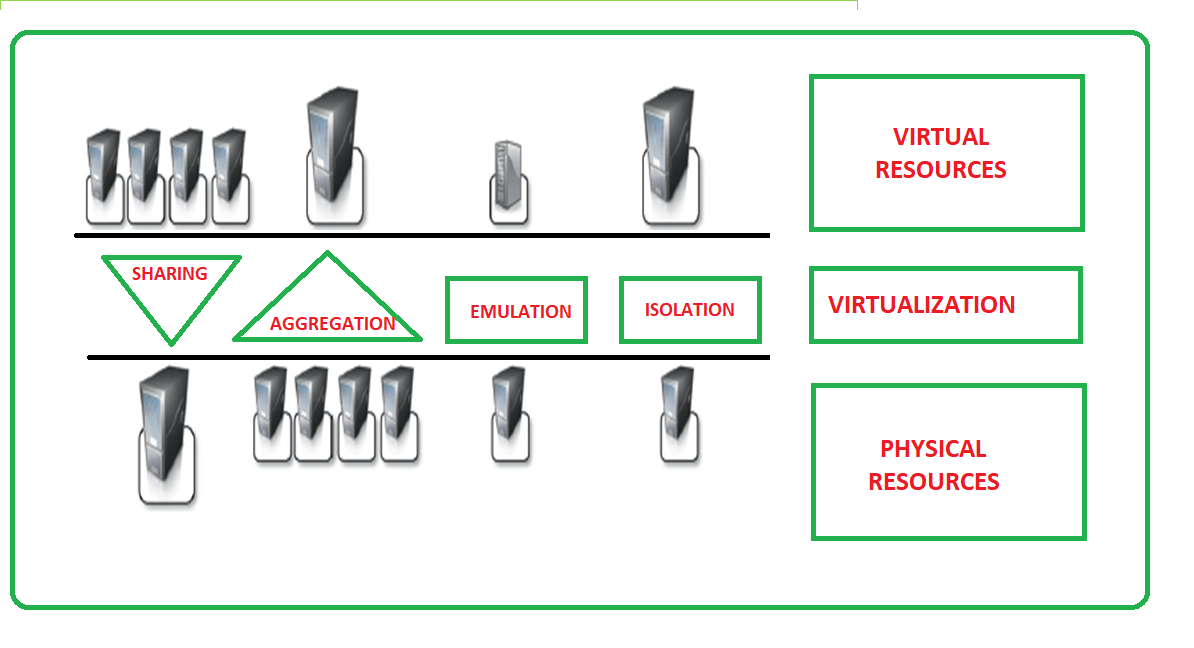 Functions enabled by a managed execution

Virtualization allows the creation of a separate computing environment within the same host. This basic feature is used to reduce the number of active servers and limit power consumption.

It is possible to share physical resources among several guests, but virtualization also allows aggregation, which is the opposite process. A group of separate hosts can be tied together and represented to guests as a single virtual host. This functionality is implemented with cluster management software, which harnesses the physical resources of a homogeneous group of machines and represents them as a single resource.

Guest programs are executed within an environment that is controlled by the virtualization layer, which ultimately is a program. Also, a completely different environment with respect to the host can be emulated, thus allowing the execution of guest programs requiring specific characteristics that are not present in the physical host.

Virtualization allows providing guests—whether they are operating systems, applications, or other entities—with a completely separate environment, in which they are executed. The guest program performs its activity by interacting with an abstraction layer, which provides access to the underlying resources. The virtual machine can filter the activity of the guest and prevent harmful operations against the host.

The concept of portability applies in different ways according to the specific type of virtualization considered.
In the case of a hardware virtualization solution, the guest is packaged into a virtual image that, in most cases, can be safely moved and executed on top of different virtual machines.
In the case of programming-level virtualization, as implemented by the JVM or the .NET runtime, the binary code representing application components (jars or assemblies) can run without any recompilation on any implementation of the corresponding virtual machine.