On-Premises cost is calculated on the basis of various factors such as hardware type, operating system used, storage, database, virtualization tools, and various others. The default cost rate can be estimated with the help of Cost Estimator. In the cloud cost control settings, the on-premises cost is used to estimate the monthly cost of Virtual machines (for Virtualization) and other resources.

Virtualization is a methodology of designing a virtual (non-physical) version of any hardware service. Virtualization is a resource-efficient technique, as it is cost-effective and uses fewer resources like hardware and energy. With Virtualization, multiple operating systems and other application programs can be installed and used on single hardware at the same time.

On-Premises cost estimates of Virtualization is of eight types, which are as follows: 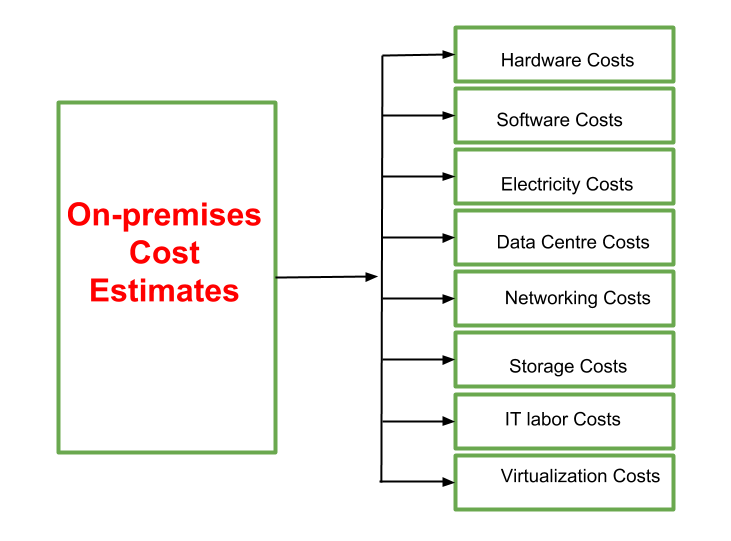 If the user specifies Windows as an operating system for their environment, then the calculator provides an estimate of the Windows licensing costs based on the number of cores required by the user’s environment. All the software and application come under this category and the cost of their use is calculated as per their use by the user. This software is sometimes available to use in weekly, monthly, or yearly packages for the convenience of the user otherwise it will become complex to manage software for everyday use.

Estimates the approximate electricity consumption costs. This is done by allocating a power rating to the user’s hardware configuration and then multiplying it with an industry-standard rate for power consumption. The power consumed by the system and all the peripherals of the system come under this category. Its cost is calculated as we calculate the cost of electricity for our home. As electricity is a basic public utility, it is cheaper in comparison to other costs.

Based on the user’s description, the calculator estimates the requisite amount of normalized rack space. The calculator then uses an estimated per-unit rack space cost to project the data center cost for the on-premises environment. In this, the cost of the data consumed by the various software and applications of the system of the user is calculated. There is a fixed rate of data per unit. There are certain data plans which can be deployed or employed by the user anytime which provides them flexibility in using the data as per their use.

Networking hardware and software costs are estimated to be a fixed percentage of the on-premises hardware and software costs. The calculator also adds a service provider cost based on the outbound bandwidth requirements specified by the user. The costs of the network used by the system come under this category. It is calculated as per the bandwidth used by the system of the user. It provides several benefits which are:

The calculator computes storage cost by multiplying an estimated market rate for DAS, SAN, NAS by the amount of disk space specified by the user. In addition to storage, users can estimate current backup and archive volume. It is calculated at cost per gigabyte, i.e., cost/GB. Any amount of storage can be used by the user. It provides a flexible and scale-able environment that helps them to increase or decrease their storage use as per their needs.

Based on the user’s description, the calculator estimates the number of IT administrator man-hours that will be required to maintain the on-premises environment. The cost of all the employees and personnel required for the functioning of the system comes under this category.