*args and **kwargs in Python 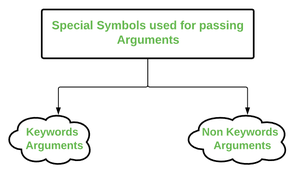 “We use *args and **kwargs as an argument when we have no doubt about the number of  arguments we should pass in a function.”

The special syntax **kwargs in function definitions in python is used to pass a keyworded, variable-length argument list. We use the name kwargs with the double star. The reason is because the double star allows us to pass through keyword arguments (and any number of them).

Example for usage of **kwargs:

Using *args and **kwargs to call a function

Using *args and **kwargs in same line to call a function