Let’s imagine a situation, Ankita went to a fair in her village. She wanted to go on rides like the Giant Wheel and play Hoopla (a game in which a ring is thrown on the items kept in a stall, and if the ring covers any object completely, the player gets it). The number of times she played Hoopla is half the number of rides she had on the Giant Wheel. If each ride on the giant wheel costs Rs 3, and a game of Hoopla costs Rs 4, find out the number of rides she had and how many times she played Hoopla, provided she spent Rs 20.

Can we find the solution to this system of equations? There are several ways of finding solutions, let’s look at them in detail.

An equation that can be put in the form of ax + by + c = 0, where a, b, and c are real numbers and a and b are both non-zero is called a linear equation in two variables x and y. Geometrically, if all the points satisfying this equation are plotted on the cartesian plane. It represents a line.

Similarly, a system of two linear equations represents two lines. The solution to that system represents points that satisfy both of the equations. There can be either no point, one point, and infinitely many points.

One Solution, No Solution, and Infinitely many solutions.

There are several methods of solving a system of linear equations algebraically, let’s look at two of those methods:

Step 1: Find the value of one variable, say y in terms of the other variable, i.e., x from either equation, whichever is convenient.

Step 2: Substitute this value of y in the other equation, and reduce it to an equation in one variable, i.e., in terms of x, which can be solved.

It can be solved according to the steps explained above,

We pick an equation to represent value of one variable in terms of others,

Substitute the value of x in the other equation.

This solution can also be checked by substituting both the values in these equations.

Note: We have substituted the value of one variable by expressing it in terms of other variable to solve the problem. That’s why this method is called substitution.

The pair of linear equations that is formed from the above description is,

Putting this value in the other equation.

Question 1: Find all possible solutions of the following system of equations using the elimination method.

Subtracting both of the equations,

This is false. So, no solution exists for this system of linear equations.

It’s also given that the digits differ by 2,

Substituting x = y + 2 in the equation given above,

Substituting y = x + 2, in the equation given above,

It is one of the techniques to determine the solution of a linear equation in two variables, it is known to be the quickest method.

Assume a pair of Linear equation:

By using Cross-multiplication, we can find the values of ‘x’ and ‘y’:

Subtracting equation (4) from equation (3) will provide the values of x and y as,

Easy Technique to understand the formulae

Write down coefficients in Original form:

Ignore the Coefficients of x and cross- multiply the remaining coefficients then subtract them: 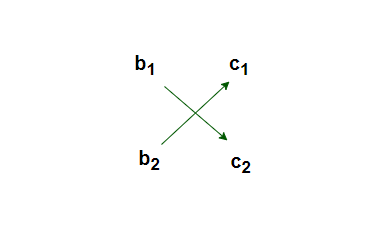 Thus, the solution of the equation of part one becomes ⇒

Now, Ignore the coefficient of y and cross-multiply the remaining terms: 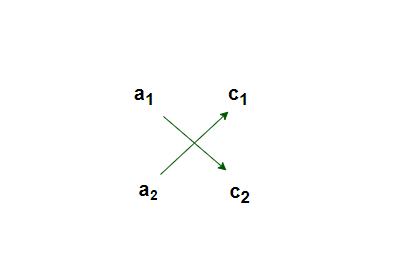 Remember to consider the equation under (-y), The second part of the solution ⇒

For the third part, ignore the coefficients of 1 and cross-multiply the remaining terms and subtract them: 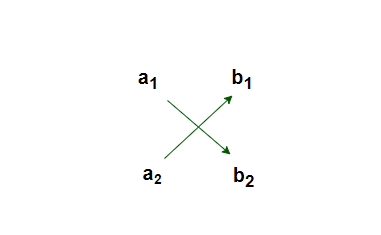 The third part of the equation becomes ⇒

Combining all the three parts ⇒

Put the values of all the coefficients in the formula,

Substitute the values in the formula: