Optics is the part of material science that concentrates on the conduct and properties of light, incorporating its connections with issues and the development of instruments that utilise or recognize it. Optics as a rule depicts the conduct of apparent, bright, and infrared light. Since light is an electromagnetic wave, different types of electromagnetic radiation, for example, X-beams, microwaves, and radio waves show comparative properties. Most optical marvels can be represented by utilizing the traditional electromagnetic portrayal of light.

Complete electromagnetic depictions of light are, in any case, frequently hard to apply practically speaking. Down to earth optics is typically done utilizing worked on models. The most widely recognized of these, mathematical optics, regards light as an assortment of beams that move in straight lines and curve when they go through or reflect from surfaces. Actual optics is a more thorough model of light, which incorporates wave impacts, for example, diffraction and obstruction that can’t be represented in mathematical optics. By and large, the beam based model of light was grown first, trailed by the wave model of light. Progress in the electromagnetic hypothesis in the nineteenth century prompted the disclosure that light waves were indeed electromagnetic radiation.

Young’s double-slit experiment aided in the understanding of lightwave theory. The slits are separated by a large distance ‘D’ from a screen or photodetector. Young’s original double-slit experiment employed diffracted light from a single source that was then transmitted through two additional slits to serve as coherent sources. In today’s investigations, lasers are frequently employed as coherent sources. 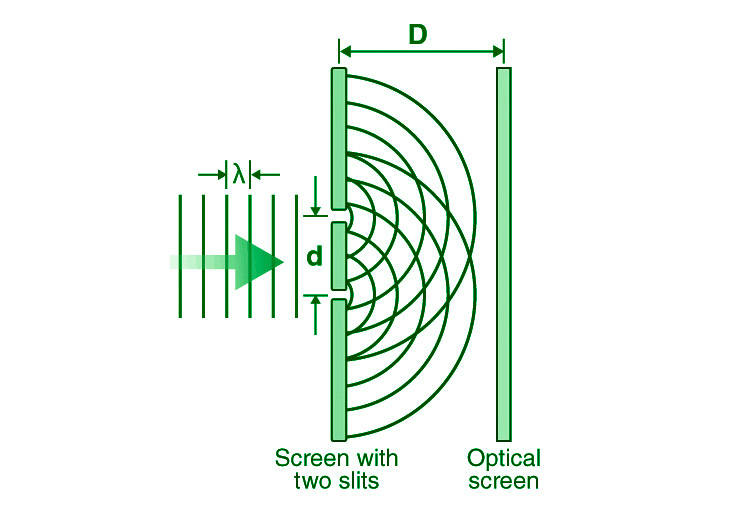 Each source may be thought of as a coherent lightwave source. The waves travel lengths l1 and l2 to generate a path difference of l at any place on the screen at a distance ‘y’ from the centre. At the sources, the point roughly subtends an angle of (since the distance D is large there is only a very small difference of the angles subtended at sources). 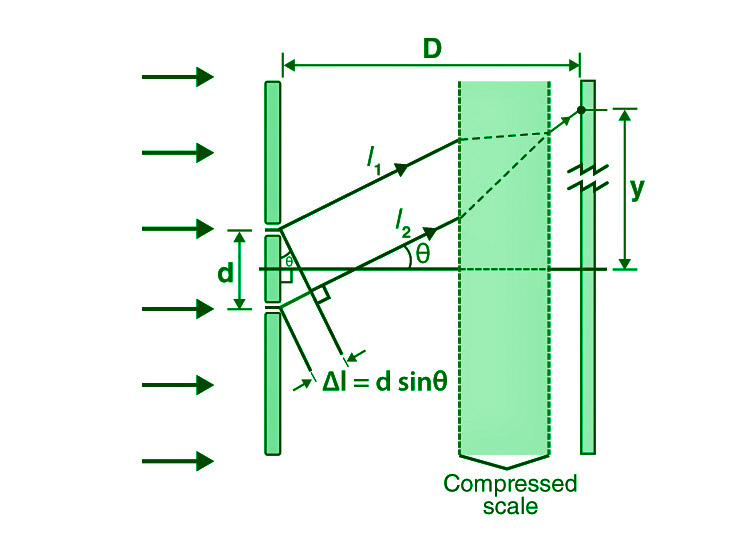 Consider a monochromatic light source ‘S’ that is kept a long way from two slits s1 and s2. S is in the same plane as s1 and s2. Because both s1 and s2 are drawn from S, they act as two consistent sources.

The light travels through these slits and lands on a screen that is positioned at a distance ‘D’ from the apertures s1 and s2. The distance between two slits is denoted by the letter ‘d.’ 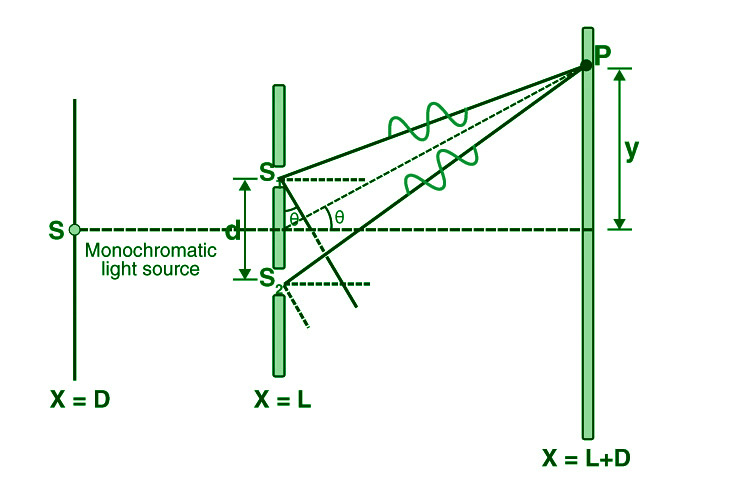 Since D > d, the two light beams are thought to be equal.

Often, d is a small amount of a millimeter and λ is a negligible portion of a micrometer for noticeable light.

Under these conditions θ is little, consequently, we can utilize the estimate,

For maximum intensity or bright fringe to be formed at P

The distance of the nth  bright fringe from the centre is

Similarly, the distance of the (n-1)th bright fringe from the centre is

For minimum intensity or dark fringe to be formed at P,

The distance of the nth  dark fringe from the centre is

Similarly, the distance of the (n-1)th bright fringe from the centre is

The fringe width is the distance between two consecutive bright (or dark) fringes.

When Young’s double-slit experiment equipment is submerged in a liquid with a refractive index of (μ), the wavelength of light and the fringe width both fall by ” times.

When white light is utilised instead of monochromatic light, coloured fringes appear on the screen, with red fringes being bigger than violet fringes.

On the screen, the position of nth order maximum is,

However, because the 2nd approximation would be violated, ‘n’ values cannot take infinitely high values. i.e. θ is small (or) y << D.

As a result, the above formula for interference maxima can be used n<< d/λ. When the value of ‘n’ equals that of d/λ, the path difference can no longer be calculated as dγ/D.

The above represents the box function or greatest integer function. Similarly, the highest order of interference minima is given by,

Shape of Interference Fringes in YDSE

The route difference between the two slits is represented by the YDSE diagram.

The preceding equation depicts a hyperbola with two foci denoted by the letters s1 and s2. 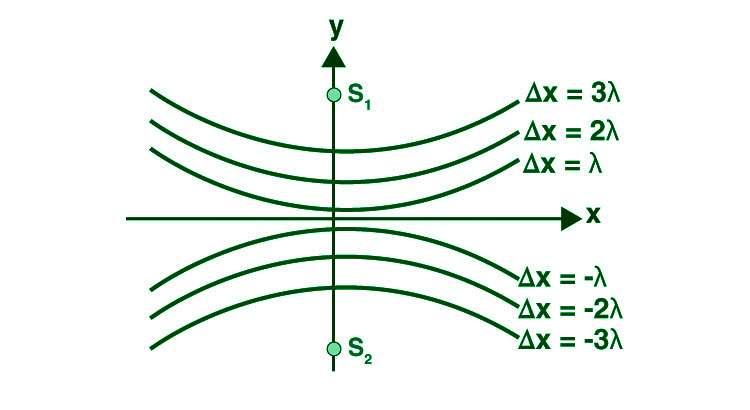 When we rotate a hyperbola on the axis s1s2, we obtain an interference pattern on the screen that is a segment of a hyperbola. Fringes are hyperbolic with a straight middle portion of the screen is in the yz plane. 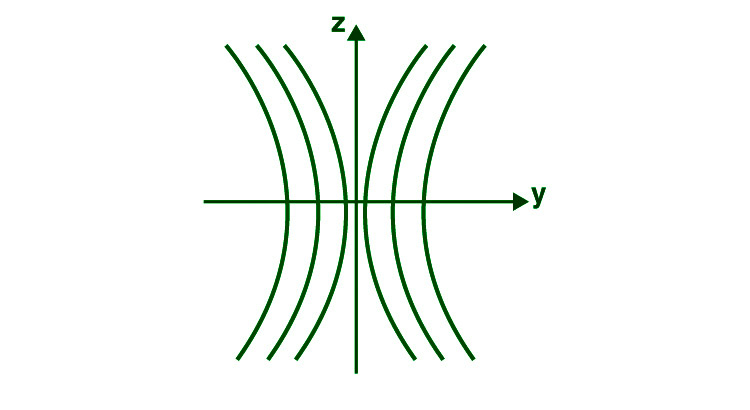 Intensity of Fringes in YDSE

The path difference must be an integral multiple of the wavelength for constructive interference to occur. As a result, if a brilliant fringe is at ‘y,’

The centre brilliant fringe is represented by the 0th fringe. Similarly, in Young’s double-slit experiment, the expression for a black fringe may be obtained by setting the path difference to:

Young’s double-slit experiment was a breakthrough point in science because it proved beyond a shadow of a doubt that light behaved like a wave. Later, the Double Slit Experiment was repeated using electrons, and to everyone’s amazement, the pattern produced was nearly identical to that seen with light. This would forever alter our perceptions of matter and particles, requiring us to believe that matter, like light, acts like a wave.

Question 1: In Young’s double-slit experiment, the ratio of brightness at minima to peaks is 9:25. Calculate the ratio of the two-slit widths.

Question 2: The distance between the slits in a double-slit experiment is 3 mm, and the slits are 2 m apart from the screen. On the screen, two interference patterns can be observed, one caused by light with a wavelength of 480 nm and the other by light with a wavelength of 600 nm. What is the distance between the fifth-order brilliant fringes of the two interference patterns on the screen?

Separation is given by,

Therefore the separation on the screen between the fifth order bright fringes of the two interference patterns is 4×10−4 m.

Question 3: The widths of two slits in Young’s experiment are 1: 25. The intensity ratio at the interference pattern’s peaks and minima, Imax/Imin is

Intensity is proportional to width of the slit. thus, I1/I2

Question 4: Two lucid point sources S1 and S2 vibrating in stage radiate light of frequency λ. The division between the sources is 2λ. Consider a line going through S2 and opposite to the line S1S2. What is the littlest separation from S2 where at least power happens?

Taking square on both sides,

where λ’= wavelength in thin film  ,

Question 6: The initial minimum of the interference pattern of monochromatic light of wavelength e occurs at an angle of λ/a for a single slit of width “a.” We find a maximum for two thin slits separated by a distance “a” at the same angle of λ/a. Explain.

Width of the slit is a.

The path difference between two secondary wavelets is given by,

Since, θ is very small, sinθ=θ

So, for the first order diffraction n=1, the angle is  λ/a

Now, we know that θ must be very small θ=0 (nearly) because of which the diffraction pattern is minimum.

Now for interference case, for two interfering waves of intensity l1 and l2

​we must have two slits separated by a distance.

​We see the resultant intensity is sum of the two intensities, so there is a maxima corresponding to the angle  λ/a

​This is why at the same angle λ/a we get a maximum for two narrow slits separated by a distance a.

Question 7: The highest and minimum intensities in an interference pattern created by two coherent sources of light have a 9:1 ratio. what is the brightness of the light used?

My Personal Notes arrow_drop_up
Previous
jQWidgets jqxTreeGrid endUpdate() Method
Next
jQWidgets jqxGauge LinearGauge height Property
Recommended Articles
Page :
Random Experiment - Probability
25, May 21
Rutherford's Alpha Scattering Experiment
24, Sep 21
Davisson-Germer Experiment
03, Oct 21
Size of The Nucleus - Rutherford Gold Foil Experiment
17, Nov 21
Double not (!!) operator in PHP
05, Dec 18
What does $$ (dollar dollar or double dollar) means in PHP ?
22, Feb 19
How to convert a currency string to a double value with jQuery or Javascript?
17, Jun 19
What is the use of a double-click event in AngularJs?
25, Jul 19
What is the difference between single-quoted and double-quoted strings in PHP?
11, Oct 19
How to print string with double quotes in Golang?
20, Apr 20
Difference between single-quoted and double-quoted strings in JavaScript
21, Jun 20
How to Truncate the Double Value to Given Decimal Places in Java?
14, Dec 20
Java Program to Compare two Double Arrays
27, Dec 20
Java Program to Demonstrate the Double-Check Locking For Singleton Class
05, Jan 21
How to change background color of paragraph on double click using jQuery ?
31, Mar 21
Difference between Decimal, Float and Double in .Net
10, Jun 21
What does double underscore (__) in front of a variable in Node.js ?
07, Jul 21
How to Double Underline a Text in Microsoft Word?
11, Aug 21
Logarithmic vs Double Logarithmic Time Complexity
15, Oct 21
Java Program to Implement Hash Tables with Double Hashing
01, Feb 21
Difference Between Single and Double Square Brackets in R
12, May 21
C# Program to Find the Negative Double Numbers From the List of Objects Using LINQ
06, Dec 21
In how many ways can 7 students be assigned to 1 triple and 2 double hotel rooms during a conference?
14, Dec 21
How do the PHP equality (== double equals) and identity (=== triple equals) comparison operators differ?
11, Oct 18
Article Contributed By :