An atom is the smallest unit of an element consisting of protons  (positive charge), electrons (negative charge), and neutrons(neutral). The protons are positively charged particles and electrons are negatively charged particles that determine the valency of the element.  An atom can be divided into two regions the first one is the nucleus which contains protons and neutrons, and another one is the outer shell that carries electrons. Electrons of an atom keep revolving around the nucleus on its own orbit just as we can see in the solar system where planets keep revolving around the Sun. Protons and neutrons share similar mass but electrons are comparatively negligible mass than proton or neutron. The atomic mass is totally determined by the nucleus as it carries protons and neutrons.

What is an isotope?

Isotopes are different types of elements that have the same number of protons but a different number of neutrons. Carbon, potassium, and uranium, for example, all have numerous naturally occurring isotopes. Isotopes are characterized first by their element, then by the total of their protons and neutrons.

The stability of isotopes varies. Carbon-12 (12C) is the most prevalent isotope of carbon, accounting for 98.89% of all carbon on Earth. Carbon-14 (14C) is an unstable element that exists only in tiny amounts. Unstable isotopes are known to release alpha particles (He2+) and electrons. Through a process known as radioactive decay, neutrons, protons, and positrons can be released and electrons collected to achieve a more stable atomic configuration (lower amount of potential energy). The newly formed atoms may be in a high-energy state and release gamma rays, reducing energy but not converting the atom into a different isotope. These atoms are known as radioactive isotopes.

Let’s now discuss the isotopes of different elements like Hydrogen, Carbon, Oxygen, and Neon as below:

Hydrogen has atomic number one and is the first element in the periodic table. Isotopes are elements that have the same atomic number but a different mass number. There are three hydrogen isotopes: protium 1H1, deuterium 1H2 or D, and tritium 1H3 or T. Because of the varying amount of neutrons in them, the isotopes differ.

Hydrogen has three naturally occurring isotopes, which are represented by the letters 1H, 2H, and 3H. Other very unstable nuclei (4H to 7H) have been produced in the lab but have not been detected in nature. Each isotope has distinct characteristics. These isotopes have been widely utilized to date.

The three isotopes of hydrogen are briefly discussed below: 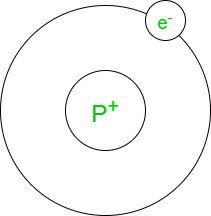 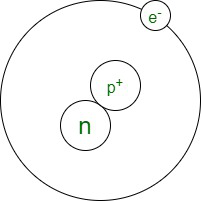 Carbon has 15 known isotopes among which Carbon-12, Carbon-13, and Carbon-14 are the major naturally occurring isotopes. They are stable and occur naturally.

Oxygen consists of 16 isotopes in which there are three main isotopes  oxygen-16, oxygen-17, and oxygen-18. Oxygen-16 is the most stable isotope among them. So, the isotopes of oxygen are briefly described below:

Neon is the second-lightest noble gas which has 20 isotopes. It has three major isotopes which are neon-20, neon-21, and neon-22. The other 17 isotopes of neon are no long-lived radioactive isotopes.

Problem 1: Which isotope of hydrogen is least radioactive?

Tritium is the most stable isotope of hydrogen. Hence, it is the least radioactive among all the isotopes of hydrogen which were produced by scientists and researchers as they are volatile and cannot exist freely.

Problem 2: What do you mean by heavy hydrogen?

Deuterium oxide is known as heavy hydrogen as deuterium has enriched molecules of water instead of normal hydrogen. It doe does not have any radioactive properties.

Problem 3: Which is the most common isotope of hydrogen?

Protium is the commonly found isotope of hydrogen.  It is so-called because it consists of only one proton. Its atomic no. is equal to its atomic mass and accounts for nearly 99 percent of universal hydrogen.

Problem 4: What causes an isotope?

Atoms of the same element with different numbers of neutrons are called isotopes. Elements contain one or more radioactive isotopes. Their nuclei are unstable, breaking down or declining and emitting radiation.

Problem 5: Why do isotopes exist?

Isotopes exist because different elements have different types of atoms which are referred to as isotopes. They have the same number of protons, but different neutron numbers.

Problem 6: How are isotopes applicable?

Isotopes of an element all have a similar kind of behaviour, but the unstable isotopes experience a spontaneous decline due to which they emit radiation and reach a stable state. The radioisotope activity is useful for:

Problem 7: Are all isotopes are radioactive?

Those elements with atomic numbers of more than 83 are radioisotopes, which means that they have unstable nuclei and are radioactive.