Matter is defined as everything that takes up space. Air and water, sugar and sand, hydrogen and oxygen etc. all come under matter. Furthermore, the matter is also made up of small particles. Since matter acquires so much space and is a part of our daily lives, it is only natural that one must be keen to observe what constitutes it. Scientists have always been keen to gather info about the structure and composition of matter. A philosopher in 500 BC asserted that upon dividing matter into smaller and smaller particles, ultimately, a time will come when the further division of such particles will not be possible. Other philosophers stated that such particles, when stuck together, lead to the formation of all forms of matter we see around us. Along came some Greek philosophers who endorsed the same theory, and named such particles as ‘atoms’. Hence, the atom is the most basic and fundamental unit to exist in the universe.

Atoms stack together to form all shapes around us. They are the basic building blocks of all living and non-living forms on this planet. Since atoms are so crucial to our existence, it is necessary to learn about their functioning, structure and nature. In chemistry, the structure of the atom is always studied with regard to historical context, i.e., the various theories propounded by various scientists, their postulates, drawbacks, inferences, etc. The structure of an atom was not discovered by a single scientist through a single experiment. It was a long process, involving numerous experimentations by different scholars, each of them coming up with his own results and theories until some other scientist’s theory contradicted with his. Up until the discovery of particles inside the atom, scientists were convinced that atoms were indivisible. We shall discuss all that in detail below.

Let us discuss some important terms related to the atom:

At the time of the discovery of atoms, it was widely accepted and agreed upon that they cannot be divided any further. British chemist John Dalton provided the basic theory about the nature of matter. He endorsed the idea that atoms are indivisible and indestructible in nature. He based his theory on the following two laws of chemical combination:

Dalton’s Atomic Theory gave an accurate explanation for both the laws mentioned above. It was a turning point in the study of matter. According to Dalton’s atomic theory, all matter, whether an element, a compound or a mixture is composed of small particles called atoms.

Discovery of Electrons and Protons: Failure of Dalton’s Atomic Theory

In 1886, E. Goldstein discovered the presence of positively charged radiations in a gas discharge and called them canal rays. These rays ultimately led to the discovery of a sub-atomic particle, named proton, which had a positive charge. In 1900, JJ Thomson propounded the presence of a negatively charged particle inside an atom, equal in magnitude but opposite in sign to that of the proton. Dalton’s atomic theory stated that the atom was indivisible and indestructible. But the discovery of electrons and protons inside the atom led to the failure of this theory. Curiosity arose as to how these particles are arranged within an atom. As a result, a lot of scientists proposed various atomic models. J. J. Thomson was the first person to do so.

Structure of an Atom: The discovery of two fundamental particles (electrons and protons) inside the atom, led to the failure of Dalton’s atomic theory. It was then considered necessary to know how electrons and protons are arranged within an atom. For explaining this, many scientists proposed various atomic models. J.J. Thomson was the first one to propose a model for the structure of an atom.

In 1897, Thomson claimed that the basic body of an atom is spherical in shape that contains electrons (tiny particles within the atom that create a negative charge) and a positively charged “jelly” around the electrons that neutralize the charge of the electrons. Here is when st part of John Dalton’s theory is disproved because it states that atoms are indivisible in nature when Thomson learned there are more parts to atoms which he found to be electrons! So J.J. Thomson discovered the first subatomic particle, the electron, and his new model in 1897! Thomson also contributed to the discovery of the isotope and the atoms of the same element with different atomic weights.

Many scientists came up with different ideas and explanations of the structure of an atom. The most basic model was introduced by a scientist named J. J. Thomson. This model explained the description of the inner structure of the atom theoretically. Although Thomson’s model was not an accurate model to account for the atomic structure, it proved to be the base for the development of other atomic models.

Thomson argued that atoms are uniform spheres of positively charged matter in which electrons are embedded. Popularly known as the raisin pudding model, it had to be abandoned (1911) for both theoretical and experimental reasons in favour of the Rutherford Atomic Model, in which electrons describe orbits around a small positive nucleus. Thomson’s atomic model, William Thomson (also known as Lord Kelvin) imagined the atom as a sphere with a positive charge evenly distributed and embedded in it enough electrons to neutralize the positive charge.

Observations: According to Thomson’s model, the atom is like a plum pudding structurally. He believed that the electrons were like dry fruits in a sphere of positive charge, representing the pudding. We can also compare illustrate a watermelon here, with the positive charge being spread over the edible part of the watermelon, and electrons like seeds are studded in that sphere, as illustrated in the following figure: 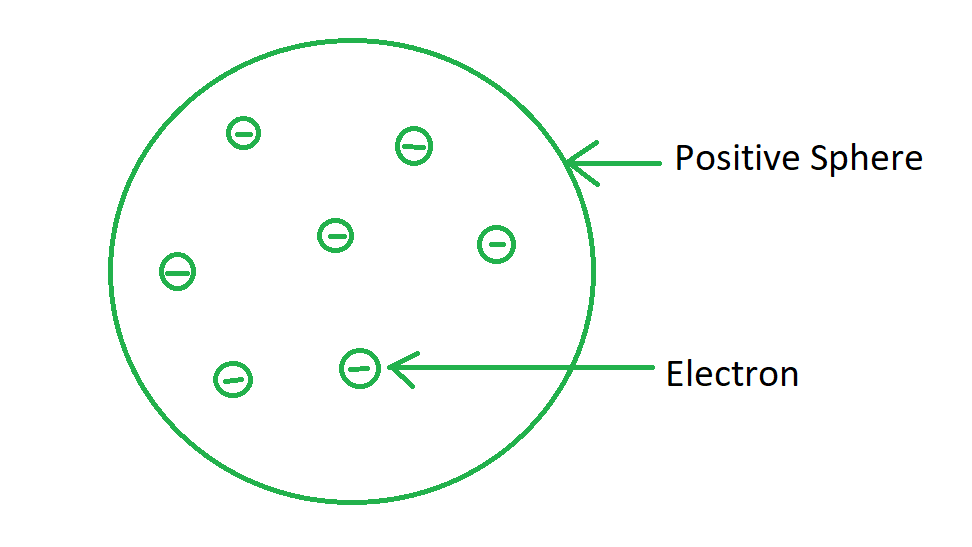 It can also be said that the electrons were embedded randomly in a sphere containing a positive charge. Thomas asserted that the positive and negative charges were equal in magnitude, hence cancelling each other’s effect, and neutralizing the atom.

Thomson’s model was a breakthrough in the field of atomic chemistry. Although it suffered from serious drawbacks, it was an inspiration for other researchers in the field to experiment and come up with their own results and inferences.

Question 1: On the basis of Thomson’s model of an atom, explain how the atom is neutral as a whole.

Thomson’s Atomic Model states that an atom is basically a positively charged sphere where the negatively charged electrons are implanted. The said charges, being equal in magnitude, cancel each other’s effect and neutralize the atom.

Although Thomson’s model was accepted at the time, it was discarded soon after because it failed to establish the stability of the atom, as it could not explain how the negative charge (electrons) is contained inside the positive sphere. In other words, it could not explain the presence of nucleus in the atom.

Question 3: What led to the failure of Dalton’s atomic theory?

Law of Conservation of Mass: It states that mass can neither be created nor destroyed in a chemical reaction, provided that the chemical system is cut off from all kinds of energy and heat from the outside. Therefore, the quantity of mass is conserved over time.

Law of Constant Proportions: It states that in a chemical substance the elements are always present in definite proportions by mass. It means that any pure sample of a compound will always consist of the same elements that are present in the same ratio by mass.

Question 6: How would you demonstrate that matter is made up of electrically charged particles.

Question 7: What led to the discovery of electrons?