SRGAN was proposed by researchers at Twitter. The motive of this architecture is to recover finer textures from the image when we upscale it so that it’s quality cannot be compromised. There are other methods such as Bilinear Interpolation that can be used to perform this task but they suffer from image information loss and smoothing. In this paper, the authors proposed two architectures the one without GAN (SRResNet) and one with GAN (SRGAN). It is concluded that SRGAN has better accuracy and generate image more pleasing to eyes as compared to SRGAN. 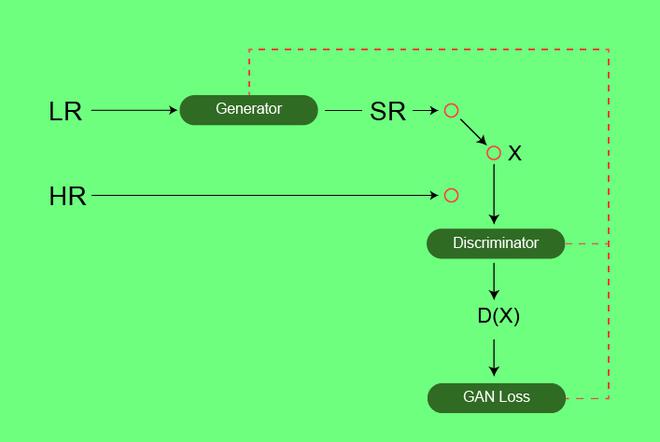 There are B residual blocks (16), originated by ResNet. Within the residual block, two convolutional layers are used, with small 3×3 kernels and 64 feature maps followed by batch-normalization layers and ParametricReLU as the activation function.

The resolution of the input image is increased with two trained sub-pixel convolution layers.

This generator architecture also uses parametric ReLU as an activation function which instead of using a fixed value for a parameter of the rectifier (alpha) like LeakyReLU. It adaptively learns the parameters of rectifier and   improves the accuracy at negligible extra computational cost

The task of the discriminator is to discriminate between real HR images and generated SR images.   The discriminator architecture used in this paper is similar to DC- GAN architecture with LeakyReLU as activation. The network contains eight convolutional layers with of 3×3 filter kernels, increasing by a factor of 2 from 64 to 512 kernels. Strided convolutions are used to reduce the image resolution each time the number of features is doubled. The resulting 512 feature maps are followed by two dense layers and a leakyReLU applied between and a final sigmoid activation function to obtain a probability for sample classification.

The SRGAN uses perpetual loss function (LSR)  which is the weighted sum of two loss components : content loss and adversarial loss. This loss is very important for the performance of the generator architecture:

The authors performed experiments on three widely used benchmarks datasets known as Set 5, Set 14, and BSD 100. These experiments performed on 4x up sampling of both rows and columns. 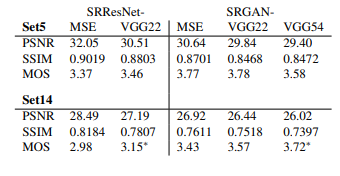 The above image shows MOS scores on BSD100 dat

aset. For each method 2600 samples (100 images ×26 raters) were assessed. Mean shown as red marker, where the bins are centered around value i.

The main contributions of this paper is: