Prerequisite: Introduction and DFS
The task is to find LCA of two given nodes in a tree (not necessarily a Binary Tree). In previous posts, we have seen how to calculate LCA using the Sparse Matrix DP approach. In this post, we will see an optimization done on the Naive method by sqrt decomposition technique that works well over the Naive Approach.

Consider the below n-ary Tree with depth 9 and let’s examine how the naive approach works for this sample tree. 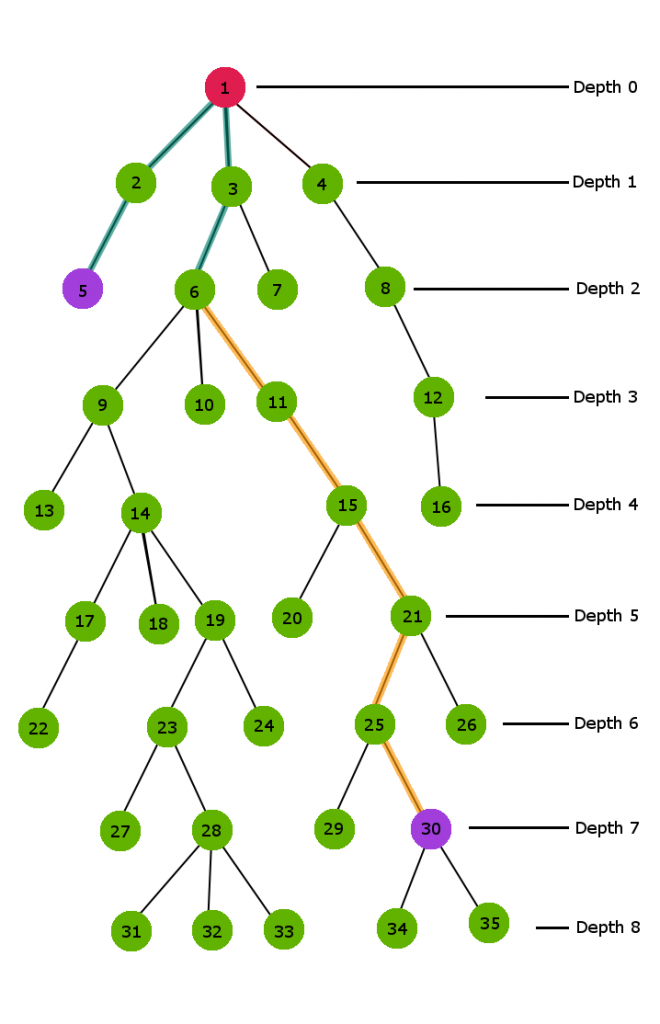 Here in the above Tree we need to calculate the LCA of node 6 and node 30
Clearly, node 30 has greater depth than node 6. So first of all we start jumping one parent above for node 30 till we reach the depth value of node 6 i.e at depth 2.

The orange colored path in the above figure demonstrates the jumping sequence to reach depth 2. In this procedure, we just simply jump one parent above the current node.

Time Complexity: We pre-calculate the depth for each node using one DFS traversal in O(n). Now in the worst case, the two nodes will be two bottom-most nodes on the tree in different child branches of the root node. Therefore, in this case, the root will be the LCA of both the nodes. Hence, both the nodes will have to jump exactly h height above, where h is the height of the tree. So, to answer each LCA query Time Complexity will be O(h).

The Sqrt Decomposition Trick :
We categorize nodes of the tree into different groups according to their depth. Assuming the depth of the tree h is a perfect square. So once again like the general sqrt decomposition approach, we will be having sqrt(h) blocks or groups. Nodes from depth 0 to depth sqrt(h) – 1 lie in the first group; then nodes having depth sqrt(H) to 2*sqrt(h)-1 lie in second group and so on till the last node.
We keep track of the corresponding group number for every node and also the depth of every node. This can be done by one single dfs on the tree (see the code for better understanding).

So, now we need to maintain 3 parameters for each node :

Pseudo code for the optimization process 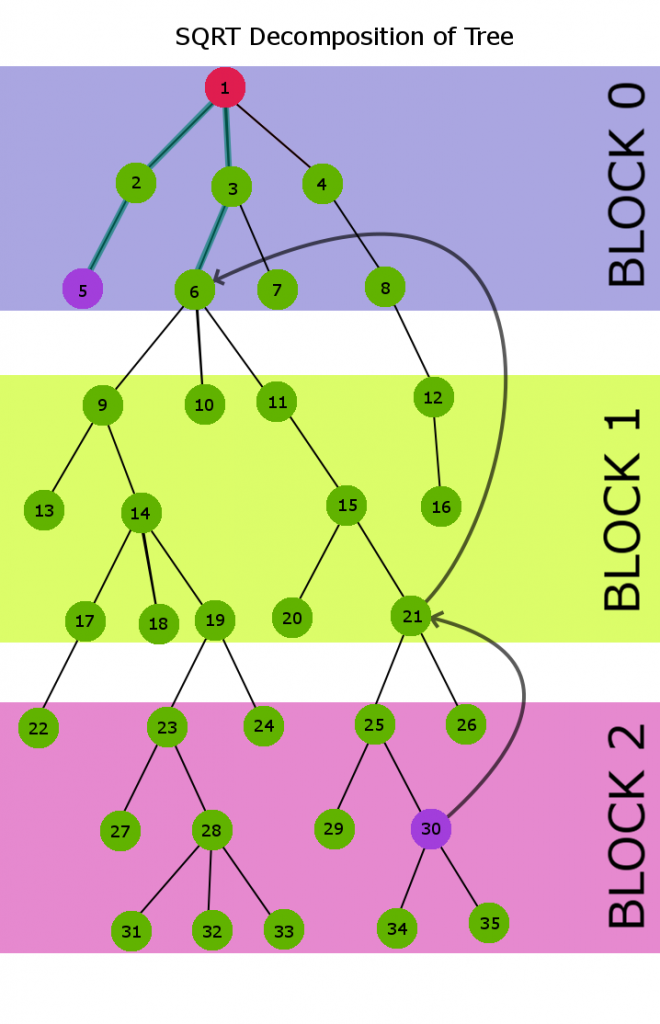 In the above decomposed tree

Note : The above code works even if height is not perfect square.

Now Lets see how the Time Complexity is changed by this simple grouping technique :

We have divided the tree into sqrt(h) groups according to their depth and each group contain nodes having max difference in their depth equal to sqrt(h). Now once again take an example of worst case, let’s say the first node ‘u’ is in first group and the node ‘v’ is in sqrt(h)th group(last group). So, first we will make group jumps(single group jumps) till we reach group 1 from last group; This will take exactly sqrt(h) – 1 iterations or jumps. So, till this step the Time Complexity is O(sqrt(h)).

Now once we are in same group, we call the LCAnaive function. The Time complexity for LCA_Naive is O(sqrt(h’)), where h’ is the height of the tree. Now, in our case value of h’ will be sqrt(h), because each group has a subtree of at max sqrt(h) height. So the complexity for this step is also O(sqrt(h)).