Centrifugation is a mechanical technique for separation which involves the usage of the centrifugal force to separate particles contained in a solution. The particles are segregated depending on their size, shape, density, and rotor speed. The suspended particles in a mixture are rotated at a high speed in a machine, called the centrifuge in order to segregate the particles from the liquid. The mixture is separated through spinning.

This method is preferred as a separation technique where the suspended particles in the liquid are significantly small to be retained by the filter paper. Therefore, the filtration technique cannot be used to separate them. The larger size and density of the particles help in the easier filtration of these particles. 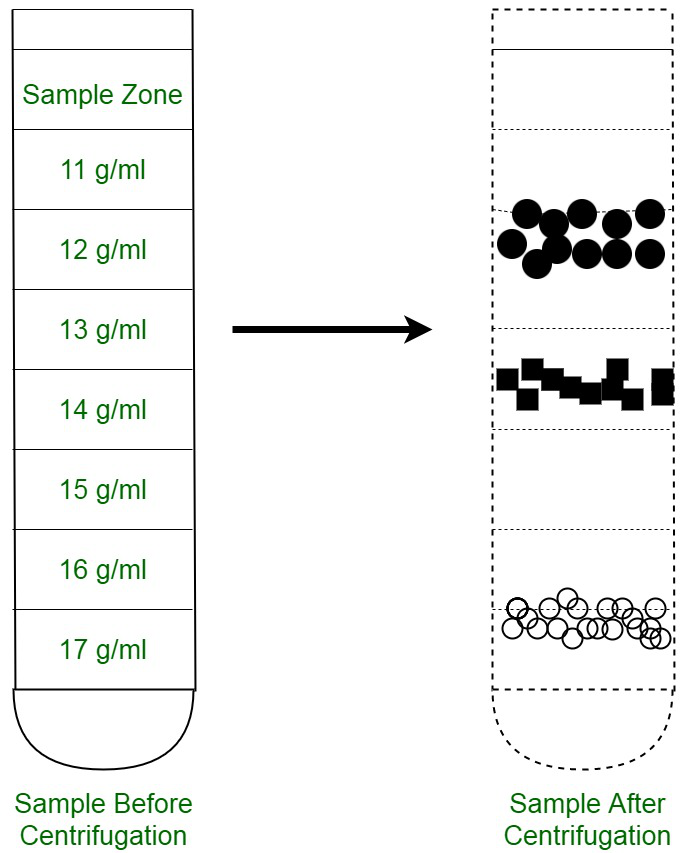 The centrifuge consists of a rotor enclosed in a refrigerated chamber which is rotated by an electric motor. The centrifuge uses centrifugal force in order to differentiate between the different phases of varying densities. A centrifuge is based on the principle of sedimentation, that is the larger density particles settle down at the bottom of the container.

The centrifugal force is observed to be proportional to the rotation rate of the rotor. The centrifugal acceleration makes the suspended particles move in a tangential direction towards the outward direction.

Substituting for ω, we get,

r = distance from the axis of rotation (m)

Centrifugation is basically dependent on the following sequence of steps :

There are basically two types of rotors :

Centrifugation can be used to extract butter from curd by churning out curd at a very high rotatory speed.

Question 3: Let a particle move with a velocity of 8 m/s around a circular park of radius 4m. Calculate the radial acceleration.

Radial acceleration is given by , v2/r

Question 4: What things should be taken in mind while using a centrifuge?

Question 5: What happens in case there is no difference in the density of solute and solvent?

The suspended particles in the solvent stay put in case there is no observed difference in the density of solute and solvent of the mixture.

Question 7: Differentiate between centrifugation and filtration.