Scope of Variables in C++ 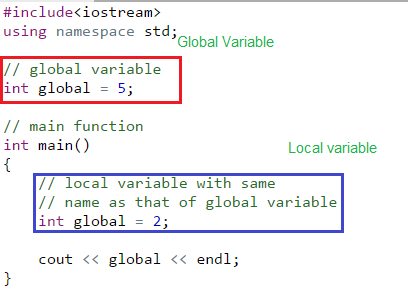 Now let’s understand each of the scope at a greater detail:

The above program displays an error saying “age was not declared in this scope”. The variable age was declared within the function func() so it is local to that function and not visible to portion of program outside this function.

Rectified Program : To correct the above error we have to display the value of variable age from the function func() only. This is shown in the below program:

In the program, the variable “global” is declared at the top of the program outside all of the functions so it is a global variable and can be accessed or updated from anywhere in the program.

What if there exists a local variable with the same name as that of global variable inside a function?