Revanth Bhattaram – Geek On The Top | “It’s a marathon, not a sprint”

At Geek on the Top, we are constantly connecting and sharing success stories of Geeks from all over the world who have reached their life’s most significant milestones. If you want to work with Top Tech giants like Meta (earlier known as Facebook) or Whatsapp and dream to add a professional software engineer after your name, then this success story will give you a kick to do extraordinary stuff in life.

Introducing Revanth Bhattaram, an Ex-Meta (earlier known as Facebook) and a Staff Software Engineer at WhatsApp, working as a Tech Lead on the WhatsApp Business Integrity Team. He’s spent the starting years of his career at Meta working in the field of Integrity, ensuring that users are protected from any harmful activities on the platform. Revanth graduated from IIT Guwahati and Carnegie Mellon University with degrees in Computer Science. 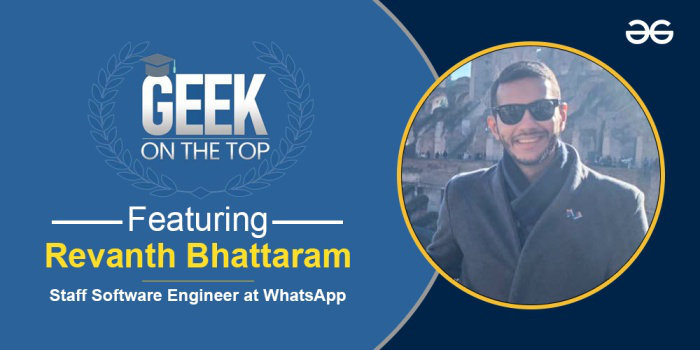 Here are some glimpses of Revanth’s Achievements

I initially got into the Facebook pipeline through a job fair at CMU that took place a month after I moved to the United States. I was able to share my resume and have a great conversation with one of the engineers at the Facebook booth before they marked my resume and recommended me for subsequent interviews.

I managed to clear my interviews and worked as a software engineering intern at Facebook HQ (Menlo Park) in the summer of 2015. Upon successfully executing my project and showcasing good ability over the course of the internship, I got an offer to return to full-time that I took up!

How to prepare for tech giants like Microsoft, Google, and Facebook? When should students commence their preparation for the same?

As a new grad, getting into one of the tech giants has two parts:

In terms of timelines, there’s no correct answer and it depends a lot on the individual, but I’d give myself at least a few months of preparation before a major interview.

What are the important skills required for any competitive coding in 2022?

Practice! I don’t engage in much competitive programming these days but my motto back in the day was to make it a habit to continue solving problems and continue training the “quick thinking” muscle to solve a variety of problems. It’s also worth remembering that you’ll need a balance of Easy, Medium & Hard problems to make sure that you don’t end up in the two extremes of:

What are the benefits of participating in extracurricular activities?

Looking back, the thing that I value the most about college life is the variety of life experiences that it offers. I will advise any current students to try and pursue the various opportunities that are available to them like programming, sports, debates, clubs, socials, and fests.

While there’s definitely one thought of wanting to optimize college life for a future job, the diversity of experiences is something that will be far more valuable in the longer run. It’s something that I didn’t practice as much myself but would definitely take note of if I had a chance to do it all over again.

What was your life’s turning point?

It would have to be the fact that I joined the anti-spam team to start my career and discovered a problem that I was incredibly passionate about. Up until I joined Facebook, I never really had a handle on the real-world impact that software and technology could have on the world.

Knowing that the work that I do is important and helps keep things safe for people across the globe is incredibly motivating and provides me with a sense of purpose. The fact that I still work in the field of Integrity and am still excited at its challenges after all these years speaks volumes!

Being an IITian played a crucial role, How?

To an extent. Being an IITian has helped with some of the initial opportunities that I encountered at the start of my career but I quickly came to realize that it was far more important for me to make the most of those opportunities, hone my own skills, and put in the hard work to make things happen. In the long run, the “IIT Tag” is essentially a footnote in a career that will be largely defined by who YOU are.

I came across GeeksForGeeks back in 2013 when I was initially preparing for interviews. With articles that were incredibly well crafted, I quickly became my go-to resource for anything related to algorithms, data structures, and interview preparation. It’s pretty popular in Silicon Valley amongst software engineers looking to switch jobs or pursue new opportunities!

What is the biggest advice for students in 2022?

Your career is a marathon, not a sprint. Oftentimes I see new engineers (including myself) try to blitz through their career and quickly achieve all their career milestones but only end up putting too much pressure on themselves before burning out. Understand that one’s career is a long journey and that you’ll need to optimize for sustainable growth to have a fulfilling well-rounded life.

Reach out to Revanth Bhattaram on his LinkedIn