Note: For a problem to be a linear programming problem, the objective function, constraints, and the non – negativity restrictions must be linear.

Solving the above linear programming problem in Python:
PuLP is one of many libraries in Python ecosystem for solving optimization problems. You can install PuLp in Jupyter notebook as follows:

Code : To solve the aforementioned linear programming problem in Python: 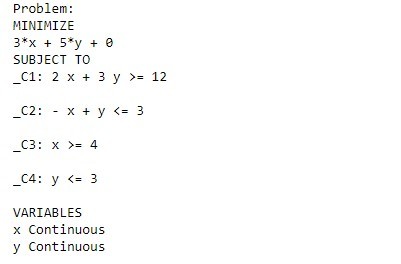 The optimal value for x and y are 6.0 and 0.0 respectively. The optimised objective function value is 18.0.