Consider the example below:-

We can understand this by an Image:

When we create an object using the above function constructor, JavaScript Engine will add dunder proto or __proto__ in the object which will point to the prototype’s constructor object. 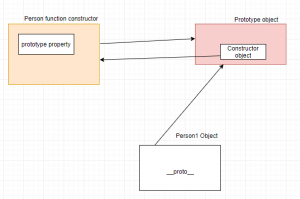 Now, we will add a method calculateAge() to the Prototype property in a Person function constructor which will inherit by the different objects. Below is the code for this:-

In above image, we can see calculateAge() method gets added to the Prototype property. Now, we will create 2 different objects which will inherit calculateAge() method and remember, When a certain method(or property) is called, it first checks inside the object but when it doesn’t find, then search moves on Object’s prototype.

Here, we created two Objects Person1 and Person2 using constructor function Person, when we called Person1.calculateAge() and Person2.calculateAge(), First it will check whether it is present inside Person1 and Person2 object, if it is not present, it will move Person’s Prototype object and prints the current age, which shows Prototype property enables other objects to inherit all the properties and methods of function constructor.