Biomolecules seem to be the most important kind of organic molecules since they play a role in the upkeep and metabolic activities of living creatures. These non-living molecules are the true footsoldiers fighting for the sustenance of life, and they play an essential role to lead a healthy life in humans. Among them, we will get the idea of proteins topic.  Proteins are another important kind of biomolecule, and they account for about half of the dry weight of cells. Proteins, which are considered to be types of polymers, are created by stringing collectively amino acids in the form of polypeptide chains. Mostly, the organization of proteins may be classified as basic (or)primary (10), secondary (20), tertiary (30), quadruple (40), or quaternary. The degree of difficulty involved in the folding of a polypeptide chain determines the diversity of these structures. Proteins are involved in both the static and the moving parts of cellular processes. Myosin is the protein that causes muscular contractions, which are necessary for movement. The vast majority of enzymes have a protein backbone. Proteins are Divided Into Several Categories Proteins may be divided into two distinct categories according to the form of their molecules.

The fiber-like structure is created in fibrous proteins once the polypeptide chains in the protein are arranged in parallel and are kept together by hydrogen and disulfide bonds. Typically, proteins of this kind cannot be dissolved in water. They are non-soluble in water. Keratin, which is found in hair, wool, and silk; myosin, which is found in muscles; are only two examples.

This morphology is made when the repeating units of polypeptides wrap around each other and give the protein a circular morphology. In most cases, they may be easily dissolved in water. Insulin and albumins are two examples of globular proteins that are often seen. 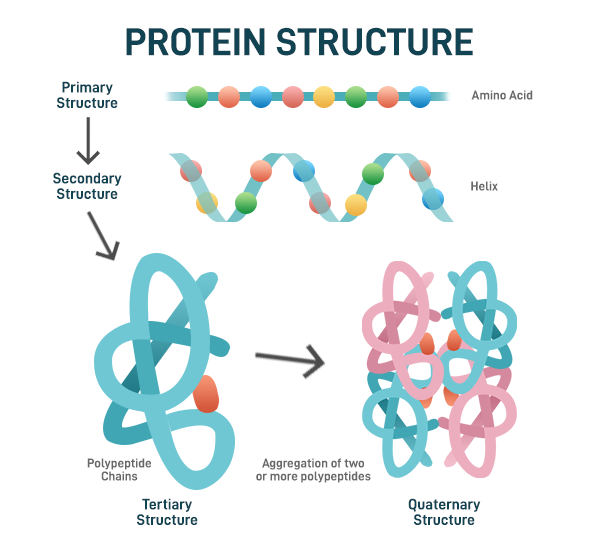 The precise arrangement of amino acids along the chains that make up a protein is referred to as its primary structure. The precise sequence of the proteins is very significant since it decides how the protein will finally fold and, as a result, what its function will be. Proteins are constructed from a variety of peptide chains that are connected to one another. These chains are composed of amino acids that are arranged in a certain order that is exclusive to the protein that is being discussed. Any alteration to the sequence will result in a change to the complete protein. The main structure of the protein is shown in the following diagram (an amino acid chain). For the protein to carry out its job in the body in the correct manner, it is essential that the polypeptide chain have an amino acid sequence in the correct order. The genetic code of DNA contains this sequence in a secure manner. If there is a sudden modification in the DNA and there is a modification in the sequence of amino acids, then the function of the protein may be changed
Covalent peptide bonds are what link the individual amino acids that make up a protein, and they are responsible for maintaining the protein’s primary structure. All of the genetic diseases that are now understood to be responsible, such as cystic fibrosis, sickle cell anemia, albinism, and others, are caused by mutations that lead to alterations in the fundamental structures of proteins. These changes, in turn, bring about changes in the secondary, tertiary, and maybe even the quarterly structure. Small chemical compounds known as amino acids each have chiral carbon and four different substituents attached to them. There is simply a difference in the fourth part of the side chain between amino acids.

Protein’s secondary structure(20) is the regional folding that happens inside a polypeptide when atoms of the backbone engage. The proteins wouldn’t exist as straightforward chains of polypeptides in their natural state. Wrinkles(or)folding in peptide chains due to chemistry(or) correlation between H-atom in amine group and hydroxyl group(-OH) in a carboxylic acid. A lengthy polypeptide chain may take on a variety of configurations, each of which is referred to as a structure. They are discovered to occur in two distinct sorts of structures, which are denoted by the notations  Alpha-helix and Beta-pleated sheet structures respectively. The hydrogen bonds that form between the -CO group and the -NH groups of the peptide bond are crucial for the regular folding of the backbone of the polypeptide chain, which leads to the formation of a secondary structure. On the contrary, some segments of the protein chain could pick up their very own local food. If this type of fold is much easier, it usually looks like a spiral, an expansive frame, or a groove. These local folds make up what is known as the protein’s secondary structure and are referred to as secondary elements.

The helices are amongst the most common ways that a polypeptide chain can create all of its potential hydrogen bonds. This is accomplished by spinning the chain into the shape of a right-handed screw so that the NH(Amine group) of each amino acid residue is hydrogen-bonded to the CO(carboxylic acid group)  of the turn that is adjacent to it in the helical structure. This causes the helix to take the shape of a right-handed screw. The polypeptide chains wound themselves up like a screw turning in the appropriate direction.

The secondary structures are arranged in this configuration such that they are extended to each other and then connected via H-bonds between adjacent molecules. All of the peptidoglycans in this structure have been elongated to almost their furthest extent, and then they have been put next to one another in a manner that is linked together by intermolecular hydrogen bonds. As a result of the structure’s resemblance to the pleated folds of draperies, it is referred to as a “pleated sheet(or)configuration”.

The formation of the quaternary structure is caused by the spatial configuration of many different tertiary structures. Many of the proteins are made up of many polypeptide chains, all of which are collectively called sub-units. The term “quaternary structure” refers to the way in which these components are arranged in space in relation to one another. The precise order of amino acids in a protein causes that protein to fold into its own specific tertiary structure, which is a physiologically active three-dimensional fold and otherwise called the tertiary structure(30) of protein. Proteins are made up of a wide variety of various combinations of secondary components, some of which are very straightforward while others are much more intricate. “Domains” are sections of the protein chain that each have their own distinct three-dimensional fold and are known to be responsible for a certain function. These are thought of as the developmental and operational building blocks of proteins in today’s society. A great number of proteins, the vast majority of which are enzymes, incorporate organic or elemental components that are necessary for their action as well as their preservation. Therefore, the investigation of protein evolution not only provides structural knowledge but also links proteins from completely diverse areas of the metabolic pathway.

Overview of the Structure of Proteins

For instance, Linderstrom-Lang (1952) was the first person to propose a pecking order of protein structure consisting of four levels: basic(10), secondary(20), tertiary(30), and quaternary(40). Because this structural grouping is the most helpful beginning place for the quality of a protein structure, you are already acquainted with the classification that has been described.

Question 1: What are the four phases in the structure of proteins?

The first, second, third, and fourth levels of a protein’s structure are called the primary, secondary, tertiary, and quaternary levels, respectively. It is important to have an understanding of the function and purpose of each level of the protein’s structure in order to have a complete comprehension of how a protein performs.

Question 2: How exactly does the folding of proteins take place?

The procedure by which a protein structure assumes its functional shape often referred to as its conformation, is referred to as the folding of proteins. Another name for this process is conformation. These two distinct protein molecules are made up of linear, non-branched chains of amino acids. It’s possible that they execute their biological purpose by winding themselves up and folding themselves into a certain three-dimensional shape.

Question 3: What causes the formation of proteins?

When a series of peptide bonds are formed between amino acids, this results in the production of a polypeptide, which, in turn, leads to the formation of proteins. Following this step, the polypeptide will fold into a specific shape depending on the interactions (strained lines) that occur between the side chains of the amino acids that compose it.

Question 4: Is DNA also a kind of protein?

Although it is often discussed in conjunction with proteins found in the nucleus known as histones, DNA itself is not a protein because Proteins are macromolecules and composed of many long amino acid chains, while DNA is a nucleic acid and made up of phosphate, ribose& deoxyribose sugar and nitrogen bases (purines and pyrimidines).

Question 5: What factors affect the structure of proteins?

Question 6: What is the fundamental make-up of a protein’s basic structure?

The term “primary structure” refers to the organized and sequential arrangement of amino acids that are included inside a protein. Proteins are built from a chain of only twenty different amino acids, each of which has its own distinct side chain. This chain is called a linear chain. Side chains of amino acids each have their own particular chemical make-up due to the nature of their structure.

Question 7: Which reaction is involved during peptide bond and where?

The reaction involved is dehydration and is taken place between the H-atom of the amino group and the hydroxyl group(OH) of carboxylic acid.