Program for Method Of False Position

We strongly recommend to refer below post as a prerequisite of this post.
Solution of Algebraic and Transcendental Equations | Set 1 (The Bisection Method)
In this post The Method Of False Position is discussed. This method is also known as Regula Falsi or The Method of Chords.
Similarities with Bisection Method:

Differences with Bisection Method:
It differs in the fact that we make a chord joining the two points [a, f(a)] and [b, f(b)]. We consider the point at which the chord touches the x axis and named it as c.
Steps:

Since root may be a floating point number and may converge very slow in worst case, we iterate for a very large number of times such that the answer becomes closer to the root. 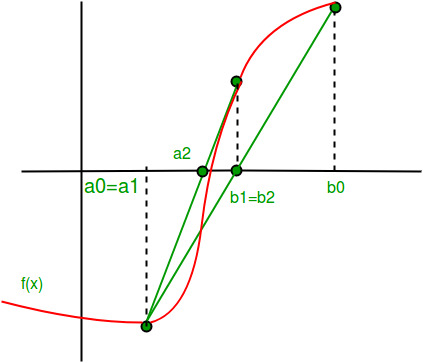 Following is the implementation.

This method always converges, usually considerably faster than Bisection. But worst case can be very slow.
We will soon be discussing other methods to solve algebraic and transcendental equations.
References:
Introductory Methods of Numerical Analysis by S.S. Sastry
https://en.wikipedia.org/wiki/False_position_method
This article is contributed by Abhiraj Smit. Please write comments if you find anything incorrect, or you want to share more information about the topic discussed above