Basics of File Handling in C

So far the operations using the C program are done on a prompt/terminal which is not stored anywhere. But in the software industry, most programs are written to store the information fetched from the program. One such way is to store the fetched information in a file. Different operations that can be performed on a file are:

The text in the brackets denotes the functions used for performing those operations.

Why do we need File Handling in C?

The output of a C program is generally deleted when the program is closed. Sometimes, we need to store that output for purposes like data analysis, result presentation, comparison of output for different conditions,  etc. The use of file handling is exactly what the situation calls for.

In order to understand why file handling makes programming easier, let us look at a few reasons:

Types of Files in C

Generally, a text file contains alphabets, digits, and special characters or symbols, while a binary file contains bytes or a compiled version of the text. It is important to recognize two types of files when dealing with files: 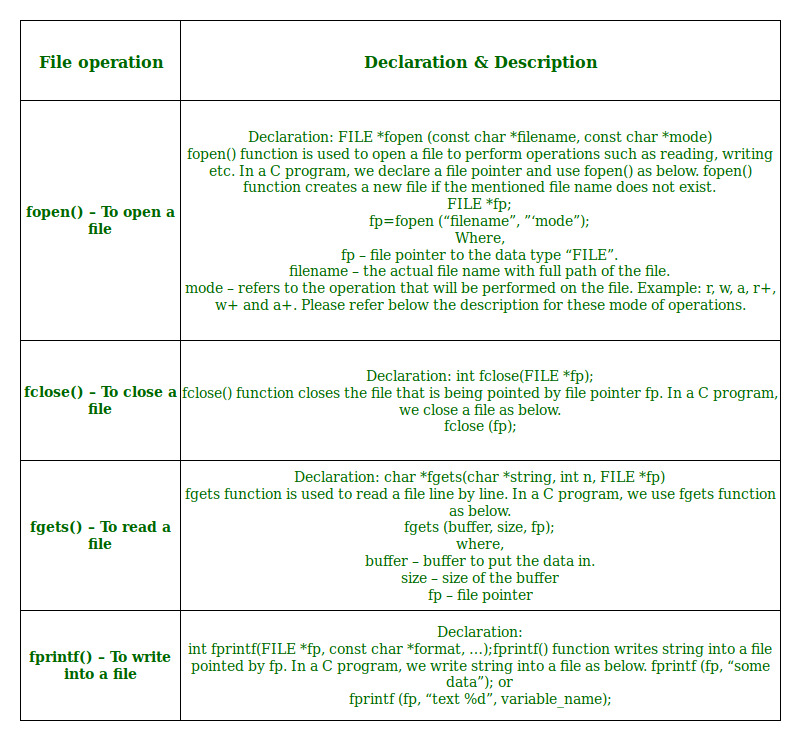 Opening or Creating a File

For opening a file, fopen() function is used with the required access modes. Some of the commonly used file access modes are mentioned below.

The second parameter can be changed to contain all the attributes listed in the above table.

Reading From a File

The file read operations can be performed using functions fscanf or fgets. Both the functions performed the same operations as that of scanf and gets but with an additional parameter, the file pointer. So, it depends on you if you want to read the file line by line or character by character.
And the code snippet for reading a file is as:

Writing to a File

The file write operations can be performed by the functions fprintf and fputs with similarities to read operations. The snippet for writing to a file is as:

Example 1: Program to Open a File, Write in it, And Close the File

This program will create a file named GfgTest.c in the same directory as the source file which will contain the following text: “GeeksforGeeks-A Computer Science Portal for Geeks”.

Example 2: Program to Open a File, Read from it, And Close the File

This program reads the text from the file named GfgTest.c which we created in the previous example and prints it in the console.

Write to a Binary File

Example 3: Program to write to a Binary file using fwrite()

Example 4: Program to Read from a binary file using fread()

If we have multiple records inside a file and need to access a particular record that is at a specific position, so we need to loop through all the records before it to get the record. Doing this will waste a lot of memory and operational time. To reduce memory consumption and operational time we can use fseek() which provides an easier way to get to the required data. fseek() function in C seeks the cursor to the given record in the file.

If you want to read more about fseek() then you can refer to fseek() in C/C++ with an example.