Nuclear energy, also known as atomic energy, is the energy released in large quantities by operations that influence atomic nuclei, the dense centres of atoms. It differs from the energy of other atomic phenomena like typical chemical reactions, which solely involve atoms’ orbital electrons. Controlled nuclear fission in reactors, which are currently used to generate electricity in many parts of the globe, is one means of releasing nuclear energy. Controlled nuclear fusion, another way for getting nuclear energy, has shown promise but will not be achieved by 2020. Nuclear fusion and nuclear fission have both released massive amounts of nuclear energy. 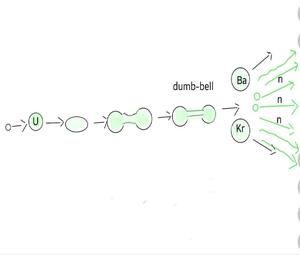 For example, 1 kg of Uranium on fission gives 1014 J of energy whereas 1 kg of coal on burning gives 107 J of energy. On the other hand, when two light nuclei fuse or combine together to form a relatively heavy nucleus then the binding energy per nucleon increases. Large energy is released in the process known as nuclear fusion.

Atomic nuclei undergo changes as a result of nuclear reactions, which result in changes in the atom itself. Nuclear reactions change one element into something wholly other.

If a nucleus interacts with other particles and then separates without changing the properties of other nuclei, the process is referred to be nuclear scattering rather than a nuclear reaction. This has nothing to do with radioactive decay. Nuclear fusion, which happens in fissionable materials and results in induced nuclear fission, is one of the most visible nuclear reactions.

where Et is the inelastic threshold energy and ε1 is the first excited state’s energy.

Why Nuclear fusion is known as a thermonuclear reaction

Question 1: Calculate the energy released in the following reaction:

Question 2: The nucleus of an atom is 92Y235 initially at rest, decays by emitting on α particle as per the equation:

It is given that the binding energies per nucleon of the parent and the daughter nuclei are 7.8 MeV and 7.835MeV respectively and that of α particle is 7.07 MeV/nucleon.  Assuming the daughter nucleus to be formed in the unexcited state and neglecting its share in the energy of the reaction. Calculate the speed of the emitted α particle. Take the mass of α particle to be 6.68 × 10 -27 kg.

This entire kinetic energy is taken by  α particle as given

Calculate the mass of 1H2 consumed in a fusion reactor of power 1 MW in 1 day.