Given two arrays start[] and end[] consisting of positive integers denoting the starting and ending points of a segment respectively, the task is to find the minimum number of integers which lies in at least one of the given segments and each segment contains at least one of them.

Mathematical formulation:
The mathematical way of describing the problem is to consider each given range of integers to be a line segment defined by two integer coordinates [ai, bi] on a line. Then the minimum number of integers required to cover each of the given range is the minimum number of points such that each segment contains at least one point.
The representation of Example 1 is shown below: 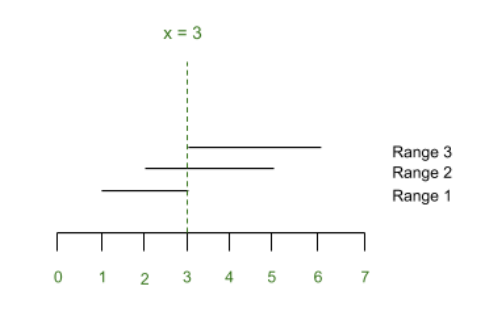 Time Complexity: O((A-B+1)*N), where A is maximum of ending points of segments and B is the minimum of the starting points of the segments.
Auxiliary Space: O(1)

The problem can be solved efficiently by using the Greedy Technique. Follow the steps given below to solve the problem:

Another approach to solve the problem of finding the minimum number of points needed to cover a set of intervals, which uses a divide and conquer algorithm.

Follow the Below steps to solve the above approach:

Time complexity: O(N*logN), due to the recursive nature of the algorithm, where N is the number of intervals.
Auxiliary Space: O(N), since we need to store the intervals in each recursive call.