Methods of preparation of Haloalkanes and Haloarenes

Alkyl halide (haloalkane) and aryl halide (haloarene) are formed when hydrogen atoms in an aliphatic or aromatic hydrocarbon are replaced by halogen atoms. Haloalkanes have halogen atom(s) attached to an alkyl group’s sp3 hybridized carbon atom(s), whereas haloarenes have halogen atom(s) attached to an aryl group’s sp2 hybridized carbon atom(s). Many halogen-containing organic compounds exist in nature, and some of them have clinical applications. Examples of Haloalkanes and Haloarenes:

Methods of preparation of Haloalkanes

There are various methods to prepare haloalkanes. Haloalkanes can be prepared from alcohol, from hydrocarbons. Let’s take a look at all the methods,

When alcohol reacts with concentrated halogen acids, phosphorus halides, or thionyl chloride, the hydroxyl group is replaced by halogen. Thionyl chloride is preferred because alkyl halide is formed in this reaction along with the gases SO2 and HCl. Because the two gaseous products are escapable, the reaction yields pure alkyl halides. The presence of a catalyst, ZnCl2, is required for the reactions of primary and secondary alcohols with HCl. (R – Alkyl group)

Alkyl chloride is produced by either passing dry hydrogen chloride gas through an alcohol solution or heating an alcohol-concentrated aqueous halogen acid mixture.

A complex mixture of isomeric mono- and polyhaloalkanes is formed when free radicals chlorinate or bromate alkanes, which is difficult to separate as pure compounds. As a result, the yield of any single compound is extremely low.

In the laboratory, adding bromine in CCl4 to an alkene results in the release of a reddish-brown color of bromine, which is an important method for detecting a double bond in a molecule. The reaction results in the formation of colorless vic-dibromides.

Alkyl iodides are frequently synthesized by reacting alkyl chlorides/bromides with NaI in dry acetone. This reaction is also known as the Finkelstein reaction.

Heat an alkyl chloride/bromide in the presence of a metallic fluoride to produce alkyl fluorides. such as AgF (silver fluoride), Hg2F2, CoF2, or SbF3. Swarts reaction is the name given to this reaction.

Method of Preparation of Haloarenes

Aryl chlorides and bromides can be easily synthesized by electrophilic substitution of arenes with chlorine or bromine in the presence of Lewis acid catalysts such as iron or iron(III) chloride.

Because of the large difference in melting points, the ortho and para isomers can be easily separated.

From amines, haloarenes are made using Sandmeyer’s reaction. When an aromatic amine is dissolved in the solution of sodium nitrite then, a diazonium salt is formed. Freshly prepared diazonium salt is mixed with cuprous chloride or cuprous bromide, the diazonium group is replaced by the –Cl or –Br group. 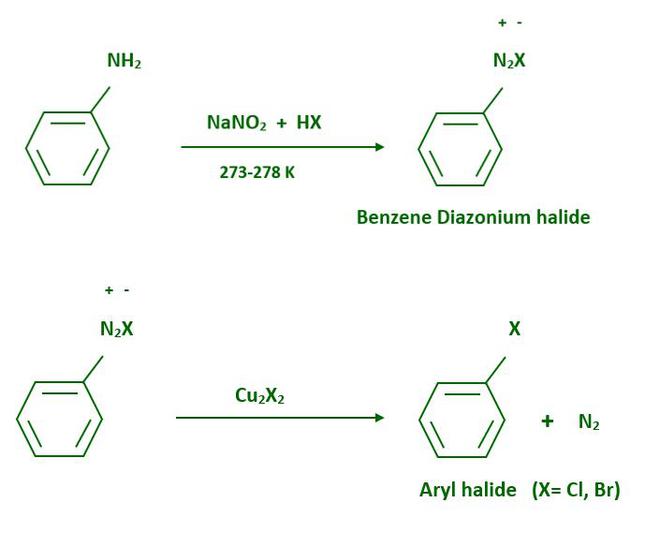 The presence of cuprous halide is not required for iodine replacement of the diazonium group, which can be accomplished simply by shaking the diazonium salt with potassium iodide. 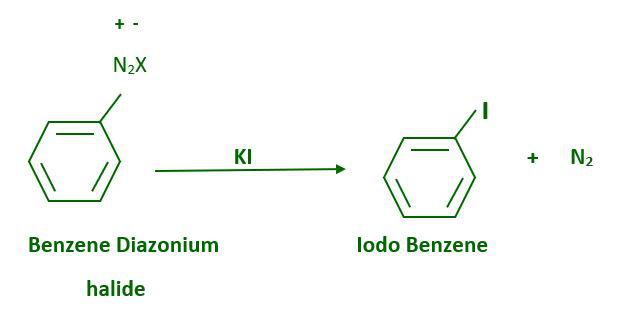 Question 1: Why isn’t sulphuric acid used in the alcohol-KI reaction?

We know that (H2SO4) sulfuric acid is an oxidizing agent, if we use it in an alcoholic KI reaction, it will convert KI to corresponding HI and oxidize the HI. That’s why sulfuric acid can not be used in the reaction of alcohols with KI.

Question 2: Identify all of the monochloro structural isomers that are likely to be formed during free radical monochlorination of (CH3)2CHCH2CH3.

When the monochlorination occurs the following 4 product will produce-

Question 3: How to distinguish between C2H5Br and C6H5Br give chemical reaction test.

Aqueous NaOH is used to heat both. C2H5Br produces ethanol and NaBr, which when combined with AgNO3 produces a yellow precipitate of AgBr. This test yields no results for C6H5Br.

Question 4: What will be the major product when cyclohexene react with bromine in presence of heat-

The above reaction gives 3-Bromocyclohexene.

Question 5: Why do haloalkanes dissolve so easily in organic solvents?