Given a positive integer N, the task is to find the maximum number of unique squares that can be formed with N arbitrary points in the coordinate plane.

Note: Any two squares that are not overlapping are considered unique. 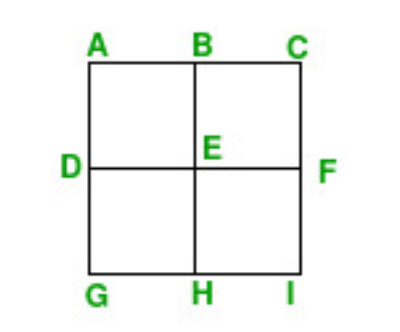 Approach: This problem can be solved based on the following observations:

Previous
Modify given string such that odd and even indices is lexicographically largest and smallest
Next
Minimize flips to make binary string as all 1s by flipping characters in substring of size K repeatedly
Related Articles
1. Maximum distance between two points in coordinate plane using Rotating Caliper's Method
2. Count of Squares that are parallel to the coordinate axis from the given set of N points
3. Count of Unique Direct Path Between N Points On a Plane
4. Number of Triangles that can be formed given a set of lines in Euclidean Plane
5. Number of unique rectangles formed using N unit squares
6. Minimum area of the triangle formed by any tangent to an ellipse with the coordinate axes
7. Number of triangles in a plane if no more than two points are collinear
8. Program to find equation of a plane passing through 3 points
9. Program to check whether 4 points in a 3-D plane are Coplanar
10. Hammered distance between N points in a 2-D plane
Article Contributed By :