We’ve all had fun with magnets as kids. Some of us are now even playing with them! What makes them magnetic though? Why aren’t there magnetic fields in all materials and substances? Have you ever given it any thought? The subjects of magnetization and magnetic intensity will be covered in this chapter.

Magnetization is caused by a magnetic moment, as we all know. This is caused by the mobility of electrons in atoms. The response of a substance to an external magnetic field determines its net magnetization.

It also takes into account any imbalanced magnetic dipole moment that the material may have due to the mobility of its electrons, as previously indicated. The idea of magnetization aids in the classification of materials according to their magnetic properties.

We’ll learn more about magnetization and the idea of magnetic intensity in this part. The arrangement of the atoms inside a material determines a magnet’s magnetic behaviour. This is what we’ll be discussing in this article. The magnetization (M) of the material is equal to the net magnetic moment per unit volume of that material.

Let’s take a look at the case of a solenoid. If we consider a solenoid with n turns per unit length and a current I flowing through it, the magnetic field in the solenoid’s interior may be expressed as,

where, µ0 is the constant permeability of a vacuum.

If we fill the solenoid’s inside with a non-zero magnetization material, the field within the solenoid must be higher than before. Inside the solenoid, the net magnetic field B may be written as,

where, Bm is the field provided by the core material.

It is proportional to the material’s magnetization in this case. In terms of mathematics,

The total magnetic field may alternatively be defined as, as shown by this equation.

where, χ is the material’s magnetic susceptibility.

Substitute the value of M in the equation of B.

The arrangement of the atoms inside a material determines a magnet’s magnetic behaviour. When a ferromagnetic substance is subjected to a strong external magnetic field, it experiences a torque, which causes the substance to align itself in the direction of the applied magnetic field and therefore become strongly magnetised in that direction.

The force that a unit north – pole experiences when it is put in a magnetic field is described as the magnetic intensity at that location. The magnetic field strength at P owing to a single pole is given by: 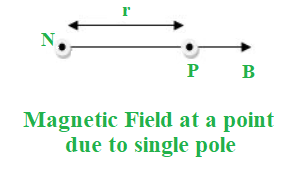 The magnetic field B, we argue, may be expressed as:

where, m is the pole strength.

The +⁄-m is the magnitude of the south and north poles, respectively. r is the distance between point P and the magnet’s centre. The length of the bar magnet is denoted by the letter l. The magnetic field intensity at point P is given by: 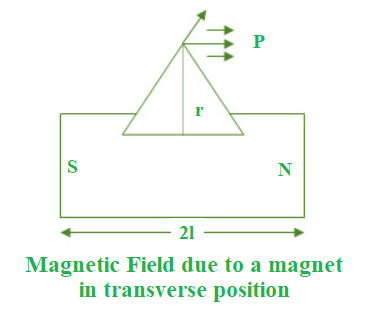 The magnetic field intensity at point P is given by,

Definition of Intensity of Magnetisation

The formula of Intensity of Magnetisation is given as:

Question 1: What is the distinction between Magnetic Intensity and Magnetisation Intensity?

The magnetic intensity of a magnet specifies the forces experienced by its poles in a magnetic field, whereas the intensity of magnetization explains the change in a magnet’s magnetic moment per unit volume.

Question 2: What exactly do you mean when you say “induced magnetization”?

Induced magnetization is a method of making a non-magnetic substance magnetic. When you put it under the influence of an external magnetic field, you may do so.

Question 3: What is the formula for magnetic intensity, and what does it mean?

Question 4: What is the definition of magnetic intensity?

Question 5: What is induced magnetisation, and how does it work?

The process of causing a non-magnetic substance to become magnetised by exposing it to an external magnetic field is known as induced magnetisation.