Linguistic Variables :
Variables in mathematics normally take numeric values, although non-numeric linguistic variables are frequently employed in fuzzy logic to make the expression of rules and facts easier. For instance, the term ‘Age’ can be used to indicate a linguistic variable with a value such as a child, young, old, and so on.

Linguistic variables are variables with a value made up of linguistic concepts (also known as linguistic words) rather than numbers, such as child, young, and so on.
Let’s define AGE as a language variable: 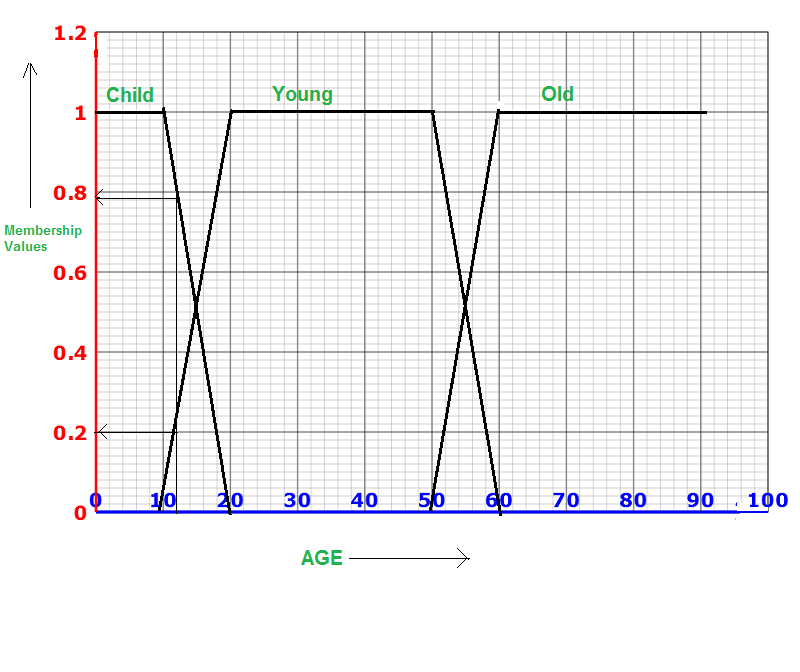 The formal definition for the linguistic variable is written as :

Let us consider an example such as (AGE, {Child, Young, Middle-aged, Old} and U – Set of ages of all the people, G, M).
The Semantic rules M give meaning to each linguistic term of AGE. Example: M for the linguistic term Old of the  linguistic variable AGE is defined as :

The syntactical rules: G that generate the modified value of the linguistic terms of x is given as :

Linguistic hedges :
Linguistic hedges can be used to modify linguistic variables, which is an important feature. Linguistic hedges are primarily employed to aid in the more precise communication of the degree of correctness and truth in a particular statement.
For example: If a statement John is Young is associated with the value 0.6 then very young is automatically deduced as having the value 0.6 * 0.6 = 0.36. On the other hand, not very young get the value ( 1 – 0.36 ), i.e., 0.64. In this example, the operator very(X) is defined as X*X; however, in general, these operators may be uniformly, but flexible, defined to fit the application; this results in great power for the expression of both rules and fuzzy facts.  Linguistic modifiers such as very, more or less, fairly, and extremely rare examples of hedges. They can modify fuzzy predicates and fuzzy truth values.

In general, for a given fuzzy proposition P, such that

And a linguistic hedge H, we can construct a modified proposition as

The modifier h should satisfy the following conditions :