A scientific method for grouping and subgrouping organisms according to their similarities and differences is called biological classification. The basic goal of biological categorization is to group the enormous variety of living things into groups that can be clearly labeled and recalled in the future. It took years for researchers to establish the most important traits for the classification, and numerous biologists have contributed to this process. Based on the morphology of the mycelium, and the manner of spore generation, the kingdom of fungus is separated into numerous classes, including.

Fungi are classified based on the mode of nutrition

Saprophytic- Saprophytic means that they live and feed on dead organic matter. Penicillium, Rhizopus, Mucor, and so on. These are primarily of two types:

Parasitic-They feed on hosts, which are either living or dead organisms. By spreading disease, they cause harm to the hosts. The parasite-host relationship is referred to as parasitism.

Symbiotic-Symbiotic fungi live in an interdependent relationship with other species that benefits both parties.

Lichens and mycorrhiza are two examples. Lichens are the result of a mutualistic relationship between algae and fungi.

In this case, algae and fungi benefit from each other because fungi provide shelter for algae and algae provide carbohydrates for fungi. Mycorrhiza is a symbiotic relationship that exists between fungi and plants. 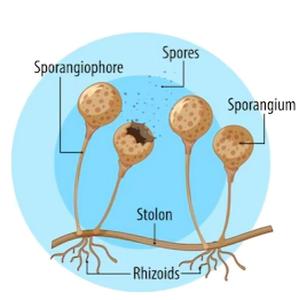 Question 1: Which kingdom has ties to the kingdom of fungi?

Kingdom fungus and the animal kingdom are closely related. This has been shown through phylogenetic analyses. According to the evolutionary tree, mammals and fungi split millions of years ago.

Question 2: What is sexual reproduction like in the kingdom of fungi?

Meiosis, karyogamy, and plasmogamy are the three steps that make up the sexual reproduction of fungi. Two daughter cells, each of which has a separate set of chromosomes, are formed from the splitting of the diploid chromosomes.

Question 3: Describe the Deuteromycetes of the fungus kingdom.

Question 4: Describe the process of vegetative reproduction in the fungus kingdom.

This happens by fragmentation, fission, and budding.

Question 5: Describe the nutritional division of the kingdom fungi.

Question 6: What function do members of the kingdom fungus play in food and medicine?