Installing atop Tool To Monitor the System Process in Linux

atop is an ASCII full-screen interactive performance monitor which is kind of similar to the top command to view the load over a Linux system. The job of the most critical hardware resources (from a performance point of view) at the system level, i.e. CPU, memory, disk, and network can be seen. atop enable us to identify which processes are actually responsible for the indicated load. In brief atop can report the activities of all processes, including the completed ones.

Installing Atop Monitoring Tool on Linux:

Here we guide you regarding how to install atop and configure atop on Linux systems ( Debian/Ubuntu-based) and also make you familiar with atop’s system-level information & Process level information so that you can easily monitor and understand your system processes.

atop can be installed from the default repositories by using the following command:- 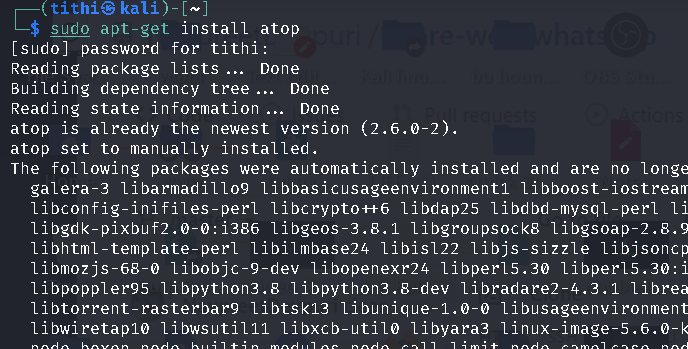 Install Atop Under Debian Systems like I am using kali Linux

You can access atop the main window by typing the following command:

ALWAYS remember to exit atop by pressing ‘q’ or with kill -15 otherwise if you stop it with any other way that will not allow it to stop the accounting mechanism which will continue to generate a huge file on disk.

When the atop window is displayed, we can see two parts in the output portion. The 1st portion shows System-level information & the second part shows Process level information Let us discuss more in deep about both of them.

The system-level information consists of the following output lines:

This section shows the total CPU time consumed in system mode (‘sys’) and in user mode (‘user’), the processes in total running (‘#proc’), the total number of threads running’ (‘#trun’), ‘sleeping interruptible’ (‘#tslpi’) and ‘sleeping uninterruptible’ (‘#tslpu’), zombie processes (‘#zombie’), clone system calls (‘clones’), and the number of processes that ended during the interval (‘#exit’), which shows ‘?’ if process accounting is not used).

CPL line row contains the load average figures showing the number of threads available to run on a CPU or the ones that are waiting for disk I/O.All these figures are averaged over 1 (‘avg1’), 5 (‘avg5’) and 15 (‘avg15’) minutes.

The total amount of swap space (‘tot’), free swap space (‘free’) on the disk is shown in this line. Including the committed virtual memory space (‘vmcom’) and the maximum limit of the committed space (‘vmlim’),( by reading default swap size plus 50% of memory size) is shown.

This line contains the number of scanned pages (‘scan’) due to the fact that free memory drops below a particular threshold and the number of times that the kernel tries to reclaim pages due to an urgent need (‘stall’).

There are 3 lines of NET, one is for the transport layer (TCP and UDP), one, for the IP layer, and one for per active interface.

For every active network interface:

The Process level information consists of the following output lines:

PID(Process-id): We can see ‘?’ when a process has been started and finished during the last interval because the process-id is not part of the standard process accounting record.

YSCPU: Due to system call handling CPU time consumption of this process in system mode (kernel mode) is displayed.

USRCPU: Due to processing the own program text CPU time consumption of this process in user mode is shown.

RGROW: This shows the amount of resident memory that the process has grown during the last interval.

VGROW: This shows the amount of virtual memory that the process has grown during the last interval.

EXC: The exit code of a terminated process is shown.

THR: The total number of threads within this process is shown.

S: The current state of the main thread of the process: ‘R’ for currently processing or in the run queue, ‘S’ for wait for an event to occur, ‘D’ for sleeping non-interruptible, ‘Z’ for zombie, ‘T’ for stop, ‘W’ for swapping and ‘E’ (exit) for processes which have finished during the last interval is shown.

CPUNR: This shows the identification of the CPU on which the main thread of the process is running on or has recently been running on.

CPU: The occupation percentage of any process related to the available capacity for the resource on the system level is shown.

CMD: The name of the process. That is running or has been finished during the last interval.