The HTTP Transfer-Encoding is a response-type header that performs as the hop-by-hop header, the hop-by-hop header connection is the single transport-level connection must not be re-transmitted. This header is performing between two nodes (single transport-level connection). If there is multi-node connection then have to use other Transfer-Encoding values. There is an end-to-end Content-Encoding header that can be use to compress the data over the whole connection.

Directives: This header accepts five directives mentioned above and described below:

Note: The terminating chunks are the regular chunks, length of those chunks by default zero.

Example: The chunk encoding for this header is useful when the server sending the huge amount of series of data to the client. The total size of the response may be unknown until the request has been completed. Suppose there is a large amount of data from a database query, a chunked response looks like this 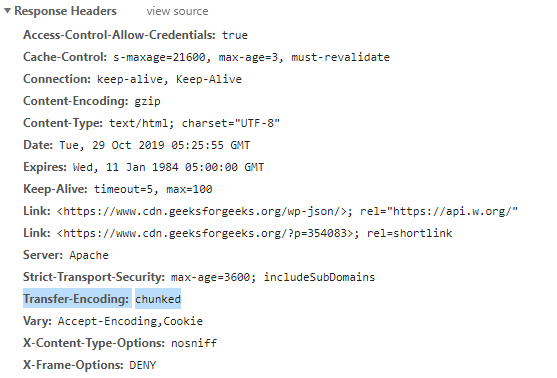 Supported Browsers: The browsers are compatible with HTTP Transfer-Encoding header are listed below: