ReactJS is a front-end library used to build UI components. In this article, we will learn to pass data into a table from a form using React Components. This will be done using two React components named Table and form. We will enter data into a form, which will be displayed in the table on ‘submit’.

Step 2: After creating your project folder(i.e. my-first-app), move to it by using the following command. 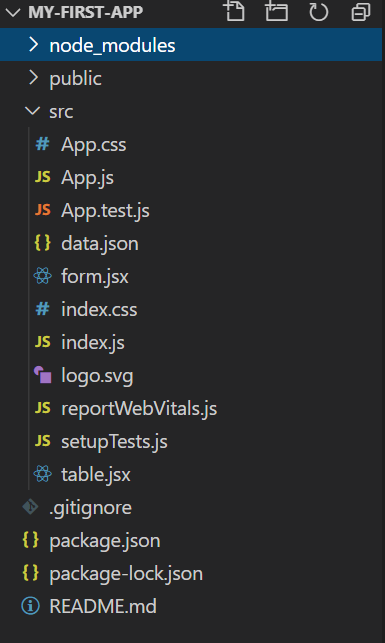 Step 3: Create a dummy JSON file; that initially contains the following one object and save it as data.json

Implementation: Now write down the following code in respective files.

Next
How to get the value of text input field using JavaScript ?
Related Articles
1. How to pass a react component into another to transclude the first component's content?
2. How to parse JSON Data into React Table Component ?
3. React.js Blueprint Table JS API Table
4. React.js Blueprint Table features Table loading states
5. How to pass data from child component to its parent in ReactJS ?
6. How to pass data from one component to other component in ReactJS ?
7. How to Test React Components using Jest ?
8. Animated modal using react, framer-motion & styled-components
9. Using setTimeouts in React Components
10. React Hook Form | Create Basic ReactJS Registration and Login Form
Article Contributed By :