Explain the Working and Application of SONAR

Sound energy is the type of energy that allows our ears to sense something. When a body vibrates or moves in a ‘to-and-fro’ motion, a sound is made. Sound needs a medium to flow through in order to propagate. This medium could be in the form of a gas, a liquid, or a solid. Sound propagates through a medium as the medium’s particles vibrate from a reference point.

Reflection of Sound: Sound reflects off a surface in the same manner as light does, and both obey the same reflection laws. The incident and reflected sounds are at right angles to the normal, and all lie on the same plane.

Infrasound or infrasonic sound refers to sounds of frequencies below 20 Hz. Ultrasonic sound, or ultrasound, is defined as frequencies greater than 20 kHz. Ultrasound is often used to disinfect parts that are difficult to access, such as spiral tubes, oddly shaped parts, and electrical components. Metal blocks can be inspected with ultrasound to find defects and flaws.

Also, a special device called SONAR uses ultrasonic sounds which are useful to measure the distance, direction, speed, and other various aspects of underwater objects or bodies.

SONAR stands for Sound Navigation and Ranging. SONAR is a process of communicating or detecting objects underwater. It is generally used by ships, submarines to detect underwater objects like rocks, icebergs which causes serious risk to the ships. Submarines also communicate with the help of SONAR and during wars military ships and submarines and detect underwater torpedo and missile attack with the help of SONAR. So, it serves for plenty of uses but let’s first understand the working of SONAR.

Working of the SONAR

SONAR works using ultrasonic waves. A transmitter and receiver are used in SONAR techniques. The whole device has been loaded into the ship. Ultrasonic waves or ultrasound are generated by the transmitter. These waves travel across water. Waves pass through water and hit objects submerged or on the seabed. These waves are reflected by objects or the seabed after they strike. As a result, the receiver collects these waves. The ultrasonic waves are then converted into electrical signals, which are studied to determine underwater conditions and obstacles. 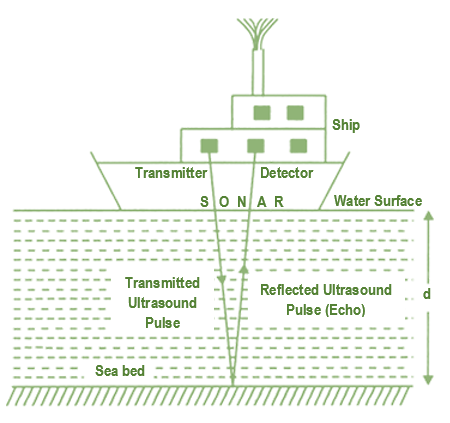 Representation of the working of SONAR

Below defined are the terms related to the working of the SONAR:

• Emitter & Transmitter: An emitter or transmitter is a device that produces ultrasonic sound waves and sends them to different directions of the ship or submarines.

• Receiver: A receiver, sometimes also called a detector is a device that detects and receives the echo coming from the transmitted waves coming from different objects and analyses them to find the distance of the objects and many more such things.

• Ultrasonic Waves: Ultrasonic waves or ultrasound are those sound waves that have a frequency greater than 20kHz (or 20,000 Hz).

Determination of the depth of sea using SONAR

Let’s consider an example: A ship emits ultrasonic waves in water using the emitter and receives a wave back after time t, and we know the speed of sound in water is v. If d is the distance from the object and the ship then the total distance covered by the wave from emitter to receiver is 2d. Therefore, the speed of the sound in this case is defined as:

Simplify for d, as:

This is the required expression to determine the distance of the object from the ship. This method is called the Echo-ranging.

Sonar technology is primarily used to calculate the depth, range, and direction of presence of objects. Below are some uses of sonar technology:

How do bats search their prey?

Ultrasonic waves are generated by bats. When these waves collide with another, they are reflected back to the bat’s ears. Bats understand the nature of these waves’ reflections and thereby determine the object’s location over their prey. This process is called echolocation.

Problem 1: What exactly is a sonic boom?

When an object travels through the air at a faster rate than the sound, it makes a high-energy sound. This force is strong enough to break glasses and cause structural damage. The sound emitted is close to that of a thunderclap or an earthquake. These objects exert a huge amount of energy on the air, causing shock waves to propagate through it. Sonic booms are the result of these shock waves, which create extraordinarily large and noisy sound waves.

Problem 2: A ship sends out a signal that returns from the seabed and is detected by the receiver of the ship after 3.4 s. If the speed of ultrasound through seawater is 1530 m/s, Calculate the distance of the seabed from the ship?

The time for transmission and receiving of sound wave, t is 3.4 s.

Problem 3: A military submarine emits a sonar signal, which returns from an underwater cliff ahead of it in 1.2 s. If the speed of sound in seawater is 1525 m/s, how far away is the cliff from the submarine?

The time taken by the pulse to return after striking the cliff, t is 1.2 s.

Therefore, the distance between the submarine and the cliff is 915 m.

Problem 4: A ship on the surface of water sends a signal and receives it back from the submarine inside water after 4s. Calculate the distance of the submarine from the ship (Given: The speed of sound in water is 1450 m/s.

The time taken by the signal to return to the ship, t is 4 s.

Problem 5: A SONAR picks up a reflected signal after 5.5 s. How far away is the body?

Problem 6: What is an Echo?

Echo occurs when the same sound repeatedly in a medium is heard. For 0.1 seconds, the vibration or echo persists in our heads. This implies that the time interval between a signal and its echo must be at least 0.1 seconds. It is formed as a result of sound being reflected into a medium. We can hear several echoes if the sound reflects more than once.