Sequential Circuits are those which have the notion of an internal state. This notion of Internal State is necessary because in sequential circuits, the output of the circuit is function of both the present input as well as the past inputs. The Internal State of a sequential circuit is nothing but the reflection of the past inputs to the circuit. Now the Internal State of a Sequential Circuit is represented by a number of State Variables. Each state variable can be in 1 of 2 possible states. This is because State Variables are physically implemented with the help of Flip-Flops, and each Flip-Flop can only represent 2 possible states. Therefore, if we have ‘N’ Flip-Flops, we can represent a maximum of 2N states. 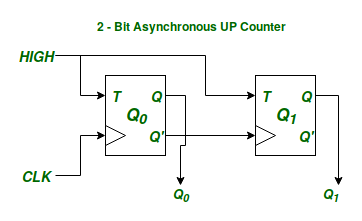 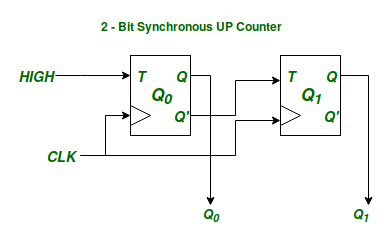 are the State Variables denoting the Internal State of each of the above circuits. Since there are 2 state variable the above sequential circuits can be in 4 possible states, and the function of a counter is to cycle through these 4 states in a particular order. Now the difference between Synchronous and Asynchronous Circuits is in how the circuit goes for one Internal State to the Next Internal State. In a Synchronous Sequential Circuit all the State Variables representing the internal state of the circuit change their state simultaneously with a given input clock signal to achieve the next state. On the other hand in case of an Asynchronous Circuit all the State Variables may not change their state simultaneously to achieve the next steady internal state. In other words the state variables are not synchronized with any universal clock signal. Comparisons –