Difference between Isobars and Isotopes

The significant distinction between isotopes and isobars is that isotopes have different atomic masses from one other, whereas isobars have comparable atomic masses.

It has been found in many experimental types of research that there are some elements whose atoms have the same atomic number that of the element but mass numbers are different such atoms of elements are called the isotopes of that element.

Suppose there are two or more elements which have different atomic number but their mass number is same then these elements are known as Isobars. Isobars are actually different elements with different number of protons and neutrons but sum of number of protons and neutrons are same for these different elements and hence they show similar physical properties. The credit to find isobars goes to Alfred Walter Stewart who discovered isobars in 1918. Some isobars are also radioactive in nature.  For radioactivity of isobars there is a rule known as Mattauch Isobar Rule. According to this rule if two adjacent elements on the periodic table have isotopes of the same mass number, then at least one of these isobars must be radioactive

Argon and Calcium are Isobars as both have same mass number and atomic number is different.

Difference between Isotopes and Isobars :

Question 1: Chemical properties of isobars are same or different explain?

Question 2: Physical properties of isobars are same or different explain?

Question 3: Which mass should be taken in case of isotopes as they have different atomic masses?

It is clear that isotopes have same atomic number but different mass number so for calculation purposes concept of average atomic mass is taken. Lets say there are three isotopes of some element X then for practical purposes first calculate the average atomic mass of the isotopes like (m1+m2+m3)/3 if they exist in nature in same ratio.

Question 4: Calculate average atomic mass of chlorine isotopes which occur in nature in 3:1 and has masses of 35 u and 37 u?

Question 5: Give the electronic configuration of Argon and Calcium isobar. 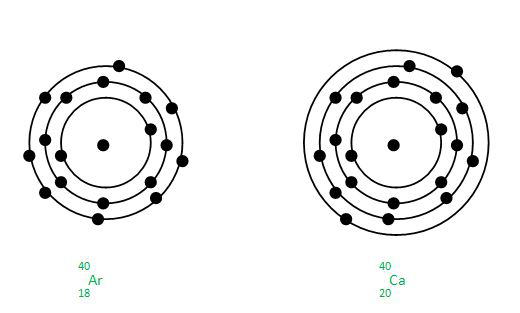