PNG and JPG formats are used for image illustrations. Both the formats are used to provide good compatibilities with certain types of images like PNG works better with line drawings and icon graphics whereas JPG works well with photographs. However, both are interconvertible with respect to each other for usage and storage of media and pictures. Python provides various options to carry out the image conversion.

Python provides support for image processing using the PIL package (Python Imaging Library). This library provides extensive file format support, that is, it can be used to convert the images from one format to another. This package can be installed into the environment by using the following command :

This package provides a module named Image which is used to create and load new images into the environment. It also allows working with image formats and their associated orientations. It is used to represent a PIL Image. The associated syntax is :

The following functions of the Image module are used to convert an image from PNG to JPG.

Image.open(): Opens and identifies an image file. It doesn’t load the file, unless explicitly the load() operation is performed. It just opens the image without actually analyzing the image contents.

formats — A list of formats to perform the opening operation of a file.

The following sample Python code is used to convert an image from PNG to JPG :

The following was the original file in C: 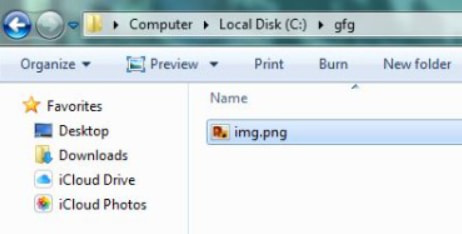 The following is the contents of the same folder after program execution: 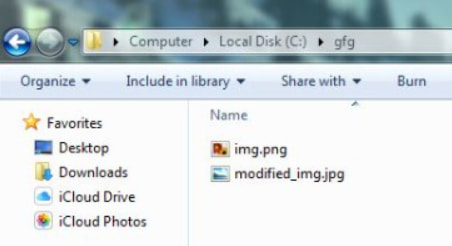 OpenCV (Open Source Computer Vision) library is an image-processing library that performs numerical operations using MATLAB syntax. It can be incorporated into our environment using the following command:

After downloading, the library can be imported into the python program using the command

It provides us various functions to manipulate images, for instance, imread() function which takes as an argument the image name from the local machine imwrite() function is used to perform manipulation and modification of images. The method has the following signature :

path — A string representing the file name which must include the extension image format like .jpg, .png, etc.

image — The image that is to be saved.

It returns true if the image is saved successfully.

The following directory stores an image by the name “img.png”:

The following output is obtained after program execution: