Qiskit is an open source framework for quantum computing. It provides tools for creating and manipulating quantum programs and running them on prototype quantum devices on IBM Q Experience or on simulators on a local computer. Let’s see how we can create simple Quantum circuit and test it on a real Quantum computer or simulate in our computer locally. Python is a must prerequisite for understanding Quantum programs as Qiskit itself is developed using Python.

First and foremost part before entering into the subject is installation of Qiskit and Anaconda. Refer to the below articles for step by step guide for anaconda installation.

Firstly, we will import the necessary packages. The import lines import the basic elements (packages and functions) needed for your program.

The imports used in the code example are:

The next three lines of code, beginning with circuit., add gates that manipulate the qubits in your circuit.

This particular trio of gates added one-by-one to the circuit forms the Bell state,|

The next line of code calls a specific simulator framework – in this case, it calls Qiskit Aer, which is a high-performance simulator that provides several backends to achieve different simulation goals. In this program, we will use the qasm_simulator. Each run of this circuit will yield either the bit string ’00’ or ’11’. The program specifies the number of times to run the circuit in the shots argument of the execute method (job = execute(circuit, simulator, shots=1000)). The number of shots of the simulation is set to 1000 (the default is 1024). Once you have a result object, you can access the counts via the method get_counts(circuit). This gives you the aggregate outcomes of your experiment. The output bit string is ’00’ approximately 50 percent of the time. This simulator does not model noise. Any deviation from 50 percent is due to the small sample size.

QuantumCircuit.draw() (called by circuit.draw() in the code) displays your circuit in one of the various styles used in textbooks and research articles. In the circuit obtained after visualization command , the qubits are ordered with qubit zero at the top and qubit one below it. The circuit is read from left to right, representing the passage of time.

Qiskit provides many visualizations, including the function plot_histogram, to view your results.

The probabilities (relative frequencies) of observing the |00? and |11? states are computed by taking the respective counts and dividing by the total number of shots. 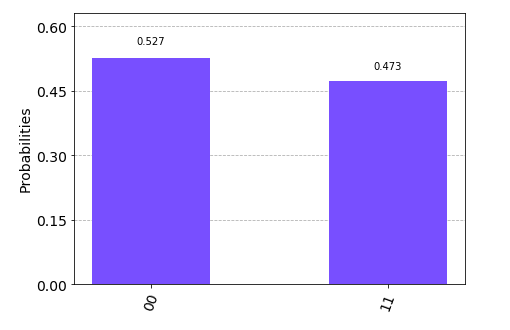