One technique to make a biodegradable polymer is to add hydrolysable ester groups to the polymer chain. Ester groups may be inserted into the polymer if the following acetal is added to an alkene undergoing free radical polymerisation. These “weak connections” will be broken down by enzymes.

Because the weak links inherent in aliphatic polyesters are vulnerable to enzyme-catalyzed hydrolysis, they constitute an important family of biodegradable polymers. 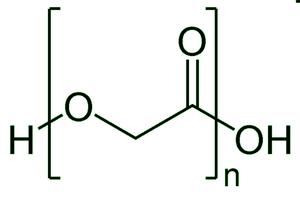 Question 1: What are the examples of biodegradable polymers?

Question 2: What is polylactic acid?

Polylactic acid is produced by polymerizing the cyclic dimer of lactic acid (HO-CH(CH3)COOH).

Question 3: What are the uses of Poly-β-hydroxybutyrate-co-β-hydroxy valerate?

The uses of Poly-β-hydroxybutyrate-co-β-hydroxy valerate are:

Question 4: What is Poly ε-caprolactone?

To make it, the lactone of 6-hydroxy hexanoic acid is chain polymerized.