Absolute and Relative Imports in Python

In this article, we are going to see that absolute and relative imports in Python.

Working of import in Python

Import in Python is similar to #include header_file in C/C++. Python modules can get access to code from another module by importing the file/function using import. The import statement is the most common way of invoking the import machinery, but it is not the only way. Import statement consists of the import keyword along with the name of the module. The import statement involves two operations, it searches for a module and it binds the result of the search to a name in the local scope. When a module is imported, Python runs all of the code in the module file and made available to the importer file. When a module is imported the interpreter first searches it in sys.modules, which is the cache of all modules which have been previously imported. If it is not found then it searches in all built-in modules with that name, if it is found then the interpreter runs all of the code and is made available to the file. If the module is not found then it searches for a file with the same name in the list of directories given by the variable sys.path. sys.path is a variable containing a list of paths that contains python libraries, packages, and a directory containing the input script. For example, a module named math is imported then the interpreter searches it in built-in modules, if it is not found then it searches for a file named math.py in list of directories given by sys.path.

Users can import both packages and modules. (Note that importing a package essentially imports the package’s __init__.py file as a module.) Users can also import specific objects from a package or module. There are generally two types of import syntax. When you use the first one, you import the resource directly.

gfg can be a package or a module. When a user uses the second syntax, then the user imports the resource from another package or module.

geek can be a module, subpackage, or object, such as a class or function.

PEP8, the official style guide for python, has a set of rules for how to formulate the python code to maximize its readability. For writing import statements there are some points to follow:

It is also good to order import statements alphabetically within each import group.

Absolute vs Relative Imports in Python

Let’s see we have the following directory structure: 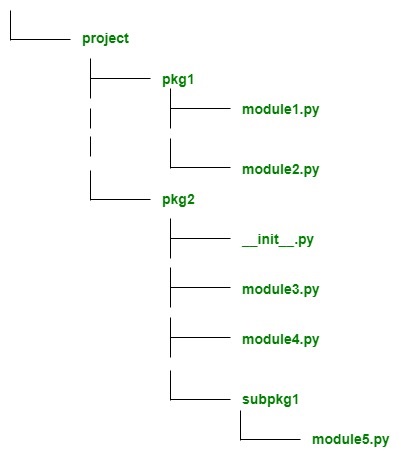 In this example, we are importing the modules by writing the full path from its root folder.

Pros and Cons of Absolute imports :

If the directory structure is very big then usage of absolute imports is not meaningful. In such a case using relative imports works well.

Relative import specifies an object or module imported from its current location, that is the location where import statement resides. There two types of relative imports :

Pros and Cons of Relative imports :