For most of the people reading this article, chances are that you live in a city. In fact, more than 55% of all the people in the world live in cities and urban areas, a number which may increase to 70% in the future as urbanization increases and people migrate to the cities in search of jobs. But this means that cities need better planning and infrastructure if they have to be energy efficient and environmentally friendly to provide a good quality of life. In other words, cities need to become smart cities! This is possible using a combination of the Internet of Things with sensors collecting data and machine learning implementing the insights obtained from the data. 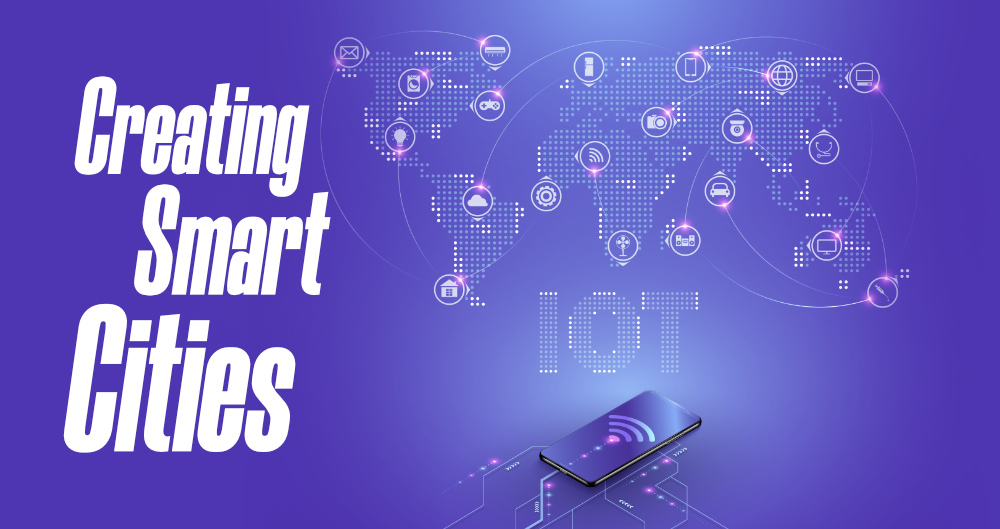 IoT can be used in many ways to make cities more efficient ranging from managing the traffic, controlling air pollution, handling waste management, creating smart buildings, planning for natural disasters, etc. So let’s see how modern technologies combined with civic planning can result in smart cities that are more efficient and cost-effective.

It is important to control the traffic in cities otherwise there are huge traffic jams in popular places and totally empty streets otherwise. This also depends on the design and layout of the roads but it can be managed by having smart traffic lights. For example, the traffic lights should automatically adjust according to the volume of the traffic so that green lights should have a longer duration where there more traffic and shorter duration when the streets are empty. Sensors can also be embedded in roads and bridges to monitor their conditions so that they can be repaired when there is much wear and tear. After all, roads with potholes are also a major cause of traffic pollution!

Air pollution is a major problem in many metropolitan cities where the particulate matter in the air is so high it is damaging to the lungs in the long run. But IoT along with machine learning can be used to reduce air pollution. This is possible by collecting data related to city pollution like emissions from vehicles, pollen levels, airflow direction, weather, traffic levels, etc using IoT from various sources and then calculating pollution forecasts to see the trends in pollution so they can be controlled.

Healthcare is an extremely important aspect of life, especially in current times when non-communicable diseases like heart problems and cancer are increasing in big cities while there are still a lot of deaths from infectious diseases in poorer places. In such a situation, IoT technology can surely help in enhancing the healthcare system so that the best healthcare is received by everybody. One example of this is microbots that can directly enter the bloodstream and reach any place inside the body to deliver medicines. Another application of IoT and sensors in healthcare is remote patient monitoring wherein patients can be monitored 24/7 and emergency responders called if there are any problems.

Public transport, whether it be buses or trains, are at the heart of any city. This is especially true in big cities where there are big traffic jams and the metro train can be a lifesaver! However, smart public transport can streamline traffic and also make commuters’ life much easier. It is very convenient when the trains and buses are connected with a single app and you know exactly when the next service will arrive and how long you need to wait. In addition to that, predictive analytics can be used to optimize the routes of public transport which provide maximum benefit and minimum cost.

There is no life without water! But water is also a finite resource which is reducing at an alarming rate. Therefore, using smart water management techniques in cities so that water can be conserved for future generations is a good idea. Sensors can be used to monitor water levels, pipe conditions, tank pressures, etc. in municipal water pipelines and tanks to optimize water management. These will ensure that water is not wasted and that problems like leaky pipes or high pressure in tanks can be handled without any loss of water. Sensors can also be used to monitor the groundwater levels so that they can be replenished if there is a groundwater shortage.

Cities are obviously incomplete without buildings and larger cities have a lot of skyscrapers as well. Now the challenge is to build smart buildings using IoT where all the functionalities like lighting, air conditioners, heating, security, etc. can be connected and controlled from a single source. This will reduce the costs of operating a building as well as increase efficiency. For example, air conditions and heaters in a building can be set to change the internal temperature according to the outside temperature. Sensors can also be used to monitor the air quality inside the building and also automatically switch on lights only when there are people. All these actions will save a lot of energy and also reduce the electricity bill!

Waste management systems in a city can be optimized so that there is efficient waste collection and disposal which helps in keeping the city clean and hygienic. After all, mismanagement of waste can lead to contamination of the soil, air, and water as well as provide a breeding ground for a host of bacteria (not to mention the horrible smell!) But IoT technology with sensors in the waste bins can be used to find when the bins are full and dispose of them accordingly. This is better than just disposing the waste on particular days only when the bind might not be full sometimes or overflowing with the danger of contamination on other days.

It doesn’t sound like parking is a problem but it is actually a big headache, especially in large cities. Less available space means that drivers have to waste their time finding parking spaces and increase road traffic in this process ( while also becoming more and more irritated!) This issue can be solved by using IoT connected sensors around the city that point out the empty parking spaces around wherever your destination is. This data will also allow city officials to see where there is congestion due to less parking space and where there is lots of empty space available. This can then be used to optimize parking and prevent traffic jams as well as driver irritation!

It is not possible to prevent natural disasters like hurricanes, earthquakes, tsunamis, etc. but it is entirely possible to anticipate these disasters before they occur and then manage them effectively. For example, sensors in combination with IoT can be used to anticipate when earthquakes are going to occur by analyzing the makeup of the ground, seismic plate interaction, energy propagation in the ground, etc. Similarly, sensors can be used to obtain flood detection data like river level readings, rainfall records, terrain and elevation of an area, etc. to predict when and where a flood might occur and the severity of the flood as well.

The infrastructure of a city i.e. its roads, buildings, etc are essentially what form the city. And smart infrastructure is a very important part of creating a smart city. This includes using IoT along with sensors to use technology intelligently which can save energy and cost for a city. An example of this is using smart streetlights along the roads that only turn on when they detect motion and stay off the rest of the time. This will definitely save energy and reduce the cost to the city.

These are only some of the applications of IoT in creating smart cities. There are many more options that can be explored to make cities a better option for more than 70% of the world’s population in the future. Many of these applications are already used in the big metropolitan cities around the world, however, there are many barriers to creating truly smart cities. Some of these may be bureaucracy or the fact that it takes time to integrate the existing systems with new technology. Whatever the reason, there is no doubt that the future is smart!

My Personal Notes arrow_drop_up
Previous
How Does Netflix Use Machine Learning?
Next
Node.js http.IncomingMessage.headers Method
Recommended Articles
Page :
Why are Smart Cities Most Vulnerable to Cyber Security Risks?
26, Apr 19
Edge Computing – A Building Block for Smart Applications of the Future
24, Aug 20
Top Applications of IoT in the World
26, Dec 20
Working and Types of Smart Card
16, May 19
Do You Know That Google’s Latest Phone is Not a Smart Phone?
21, Dec 19
13 Study Tips For Students - Smart Work is the Key of Success
09, Dec 19
All About Smart India Hackathon (SIH) 2020 - Software Edition
19, Oct 20
Blockchain | Smart Contracts
07, Jan 19
Smart CSS Solutions For Better Web Design
14, Jan 22
Internet of Things (IoT) | Set 2
22, May 18
Introduction to Internet of Things (IoT) | Set 1
14, Aug 18
IoT Home Automation
01, Jul 21
Impact of IoT on CyberSecurity
03, Oct 19
Communication Models in IoT (Internet of Things )
01, Mar 21
Combining IoT and Machine Learning makes our future smarter
23, May 19
Challenges in World Of IoT
22, Jul 19
Complementary Relationship Between Cloud Computing and IOT
01, Aug 19
IoT- Recreating Healthcare
07, Aug 19
Security Threats to IoT Devices
19, Aug 19
Benefits of IoT for transportation sector
11, Sep 19
4 Industries That Will Continue To Be Reshaped By IoT In The 2020s
31, Oct 19
7 Steps to Getting Started With IoT
05, Dec 19
IoT and Garbage Monitoring System
16, Nov 19
Challenges Faced By IoT in Agricultural Sector
06, Dec 19
Article Contributed By :