Why must user threads be mapped to a kernel thread

Types of threads :
Threads created in a computer system can be of either of the two types –

2. Kernel threads –
Kernel threads on the other hand are created by the kernel and are visible to it. A user process with the help of a provided library asks kernel to create an executable thread for that process and the kernel in turn creates the thread on behalf of the process, and puts it onto it’s list of the available executable threads present. Here the creation, execution and management of the thread is taken care of by the kernel.

Now moving on from the definitions of threads it’s time to answer the question why do we need to map these user threads to kernel threads when the only thing that differs between them is who controls the execution of these threads, kernel or the creating process? Well to understand this point we need to have a look at the diagram given below. 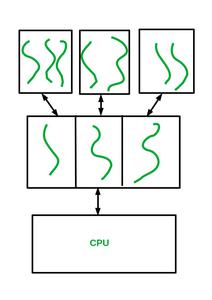 So first of all just to get it out of the way the topmost level of the diagram shows 3 boxes representing 3 different processes in the memory with the first process having 3 user threads in it’s address space second process has 2 of them and so on. The second level of the diagram from the top shows the kernel with each user level process mapped to one kernel thread in the kernel space(why? we will get to it!!) which is specified using arrows, and at the bottom level we have the CPU.

Note –
I am using the many to one model to explain the mapping process here but there are other models available for mapping. For more on mapping models for threads please refer to this article.

Scheduling of threads by CPU scheduler :