What’s the typical flow of data like in a React with Redux app ?

Redux is an open-source state management JavaScript library for managing the application state. It is popularly used ReactJS, but is not limited to it, and can also be used with other JavaScript libraries such as Angular. In a conventional React-Redux application, there is a single store along with a single root reducer. As the application grows more complex, the root reducer is split into smaller reducers that operate on the different parts of the state tree.

For large-scale production-level applications, it turns out to be a complex task to reproduce issues and add new features if the application’s state is not managed efficiently and has no control over it. Redux reduces the complexity of the code by making the state updating process easier.

Data flow in a React-Redux application

There are four fundamental concepts that govern the flow of data in React-Redux applications. 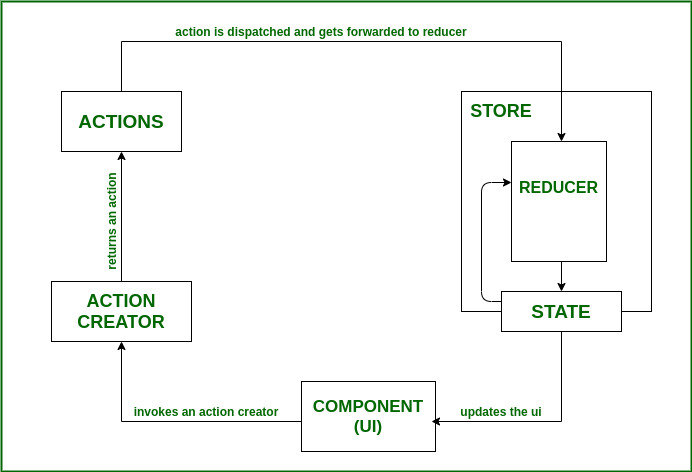 Example: Now write down the following code in your App.js file. Here, App is the default component where we have written our code.

My Personal Notes arrow_drop_up
Previous
How to add a function in JSX ?
Next
Creating a chessboard pattern with JavaScript and DOM
Recommended Articles
Page :
Redux Toolkit Better way to write Redux code in ReactJS
13, Oct 21
What is typical pattern for rendering a list of components from an array of data in ReactJS ?
20, Feb 22
How to handle app state without Redux ?
24, Mar 22
Redux Store in React Native
09, Mar 22
Explain Action’s in Redux
26, Feb 22
Redux - Basic Understanding of the Concepts for Beginners
22, Feb 21
What is Redux Toolkit and why it is more preferred?
25, Oct 20
How to use Redux with ReactNative?
19, Nov 20
What's the difference between useContext and Redux ?
19, May 21
What are the advantages of using Redux with ReactJS ?
30, May 21
What are the three principles that Redux follows ?
29, Sep 21
Explain Reducers in Redux
09, Feb 22
What is a store in Redux ?
07, Mar 22
What are the differences between Redux and Flux in ReactJS ?
27, Feb 22
How are actions defined in Redux ?
25, Feb 22
How to handle more action using redux ?
07, Mar 22
How to set initial state in Redux ?
21, Mar 22
What is the purpose of constants in Redux ?
21, Mar 22
How to persist Redux state in local Storage without any external library?
28, Jan 21
Building a react boilerplate from scratch without using create-react-app
20, Sep 21
How to optimize the performance of React app ?
10, Feb 22
React.js Pokémon App.
28, Sep 21
How to add theme to your React App?
10, Mar 21
How to add dual theme to your React App ?
30, Mar 21
Article Contributed By :