What is Plasma and Bose-Einstein Condensate?

We are very familiar with the term matter. Everything around us can be considered as a matter. Generally, it’s misconceived that the study of matter only involves three states of it which are solid, liquid, and gaseous. But, matter does exist in other forms of states in nature besides these three. This article is focused on the study of different states of matter that is solid, liquid, and gas as well as two more states of matter that include Plasma and Bose-Einstein Condensate.

Matter can be defined as substances that have their own mass and volume.

On the basis of inter-particle forces and arrangement of particles, they are normally classified into three states solid, liquid, and gas. These three states can be converted into each other by increasing or decreasing temperature and pressure.

The Four fundamental states of matter are described below :

In a plasma, the electrons of the atom get separated from its nuclei, such that the nuclei appear to be floating in the sea of electrons. For certain substances, if we continue to apply heat to their gaseous form another change of state could occur. These substances can go from a gas to a state of matter called Plasma.

For this change of state to occur very strong heat must be applied. When heat is sufficiently strong the electrons are stripped from their respective atoms creating free electrons and positive ions. Although there are both negative and positive particles, plasma is neutral overall as there are equal amounts of oppositely charged particles. 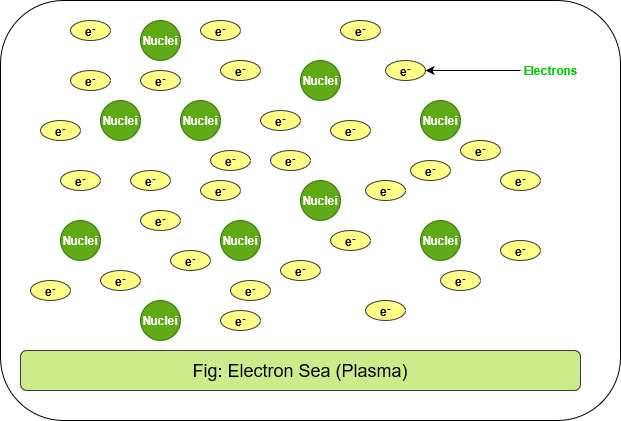 Since free electrons are present, substances in a plasma form can conduct electricity. This is what separates a gas from a plasma. All gases cannot conduct electricity but plasma can. Naturally-occurring plasma includes lightning and the Northern Lights. If we were to go far beyond planet Earth, stars also exist in plasma form. In fact, stars are really just hot balls of plasma.

Plasma can be found in fluorescent light bulbs and neon signs. When an electrical current is passed through the mercury vapor in fluorescent light bulbs, it heats up the gases sufficiently to strip the electrons and to create plasma. Plasma screen TVs are made possible due to this state of matter. A plasma screen is made of many thousands of tiny dots called pixels, which are made of three fluorescent light electrodes emitting the colors red green, and blue. The combination of these colors can give any possible color which is why we can see all colors on these.

Some of the examples of forms of plasma are:

The above four are the primary states of matter. But matter can exist in various other forms. Some of them are described below:

The Bose-Einstein Condensate is a theory that states that when you freeze an atom to absolute zero (ie, zero kelvin), the atom will beco

super atom or a superconductor.

To better understand this, you first need to know how particles react in hot and cold temperatures. Hotter particles have a tendency to move faster and colder particles move slower because they’re losing their thermal energy. Now imagine running in a straight line with your friends, the slower you run the more clumped up you get. This is the same thing with the atoms, but for the atoms, the question is how close can atoms really get? Can they all pile up on top of each other? Or does there have to be some minimal space?

Here the Pauli Exclusion Principle comes into play. This principle states that there has to be some minimal space between the atoms. There are two types of particles that we’re going to talk about namely:

Bosons do not obey the Pauli Exclusion Principle meaning that at any given state or time an infinite number of bosons can be in the same place. While fermions do obey this rule. 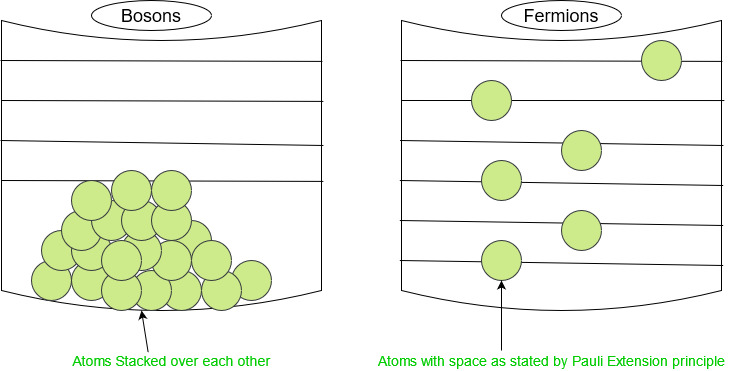 Siddartha Nath Bose and Albert Einstein were the creators of this phenomenal theory. Sadly they were unable to test it due to the lack of technology. But Eric Cornell, Wolfgang Cartel, and Carl Whitman were in 2001. They created a laser trap this laser trap. This laser traps the atom and with all the lasers pointing at it, this causes the atom to be in an exact state in which it can absorb photons. the photons are absorbed and re-emitted in random directions. Therefore cooling the atom down significantly. But this isn’t enough, another cooling method has to be applied like evaporation. The atom is super cold but there are still more particles with more thermal energy. By lighting those particles to leave we have decreased the temperature of the atoms down incredibly. So this is the bose-einstein condensate.

Particles can only have a set amount of energy. They either have the energy to bounce around in gases or just the energy to flow like a liquid or be fix it like a solid. If you take enough of the energy of the particle away you get to the tiniest or the smallest amount of energy possible. This is a Bose-Einstein condensate.  This makes all of the particles exactly the same and instead of bouncing around randomly in all different directions, they all bounced up and down in exactly the same way forming something called a Giant matter wave.

Problem 1: Is Bose-Einstein Condensate a Low-temperature state? If so why?

Yes, the Bose-Einstein Condensate is a low temperature state as to achieve this state, a large amount of energy is to be emitted from the matter. Resultant the more, energy the particles loose, the colder it gets.

There are four fundamental states of matter namely:

Problem 3: How are plasma formed?

A gas is usually converted to a plasma in one of two ways:

Heating matter to high temperatures results in electrons leaving the atoms which further results in the presence of free electrons. These methods creates a so-called partially ionised plasma.

Problem 4: What is Phase transitions?

Problem 5: What are some of the low-temperature states of matter?

Listed below are the low-temperature states of the matter: