What is an Element?

An element is a substance that cannot be broken down into two or more simpler substances by any chemical method by the application of heat or light. For instance, on melting the piece of gold, it still melts and remains as the gold element. These substances are composed of a singular type of atoms, that is, they are monoatomic. Elements are considered to be the building blocks of matter. There are 118 elements that exist in total till now, 94 elements out of these occur in nature whereas the 24 left are prepared artificially.

Elements can occur in all three states in the matter, that is, solid, liquid or gaseous state. Elements are recognized using chemical symbols and formulae. Elements maintain their homogeneity. For instance, a piece of gold is made up of only gold atoms. Atom is the smallest unit forming elements. It dictates the properties of elements. Elements also possess sharp melting and boiling points.

Example: Hydrogen is an example of an element that cannot be split down into two or more substances. 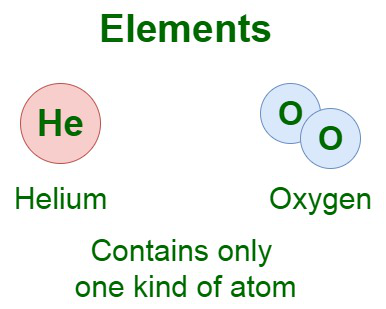 Elements occur in all three forms, that is, metals, non-metals and metalloids.

Most of the elements in the periodic table are metals. They form cations, that is positive ions and contain metallic bonds. Metals comprise of alkali metals, lanthanides as well as transition metals. Metals are rigid substances possessing a shiny lustrous body and acting as good conductors of heat and electricity. For instance, metal is considered to be a good conductor of electricity. These can be easily hammered to form sheets and drawn into wires. Therefore, the metals are both malleable and ductile. Metals are usually crystalline solids. Metals display high chemical reactivity.

Metals have a tendency of losing electrons easily. Metals easily form a lattice of positive ions surrounded altogether by a cloud of delocalised electrons. A metal may be a chemical element, for instance, iron; or an alloy, for instance stainless steel; or even a molecular compound, for instance, polymeric sulphur nitride.

Diamond is one of the allotropes of carbon. It has very high melting and boiling point and is the hardest naturally occurring substance. Non-metals are generally less dense in comparison to metals. Non-metals are the category of elements that form anions, that is negative ions by accepting or gaining electrons. This is because non-metals possess 4, 5, 6 or 7 electrons in their outermost shell which makes it easy to gain electrons during chemical reactions.

Non-metals may be solid in nature: Carbon, Silicon, Phosphorus etc.

Non-metals may be liquid in nature: Bromine

Non-metals may also be gaseous in nature: Hydrogen, Chlorine etc.

The metalloids are basically the elements possessing intermediate in their properties between metals and nonmetals. They mostly act like non-metals in their physical properties. However, there are certain exceptions. For instance, metalloids are good conductors of electricity. Some of the metalloids contract when they are melted. They also possess a metallic and dull appearance. Boron, germanium, arsenic and antimony are some commonly known metalloids.

Comparison in Metal, Non-Metals and Metalloids

Question 1: What happens on smashing a piece of iron?

Since elements are not affected by any physical or chemical processes, therefore, on breaking the piece of iron it still remains a piece of iron.

Question 2: Explain the difference between Elements and Compounds?

Question 3: Illustrate an example of a metal and a non-metal which are liquids at room temperature.

Mercury is the metal and bromine the non-metal which is liquid at room temperature respectively.

Question 4: Why copper is a metal and sulphur is a non-metal.

(i) Copper is malleable and ductile whereas sulphur is neither malleable nor ductile.

Question 5: Why is polonium a lesser-known non-metal?

Polonium is a highly reactive non-metal. It possesses radio-active properties and is highly toxic in nature.

(a) School bells made of metals.

(b) Electric wires made of copper.

(a) Since, metals are sonorous, i.e. they produce a sharp ringing sound when struck with any hard material.

(b) Copper conducts heat and electricity highly efficiently, that is it possess a very high melting point.

Question 7: Why are platinum, gold and silver preferred elements to make jewellery?

Platinum, gold and silver and situated at the bottom end of the reactivity series, thereby possessing very less reactivity. They do not chemically react with air and water. Because of this reason, they are termed as noble metals. Also, they possess a bright lustre, therefore, suitable for making ornaments.