Uses of Metals and Non-Metals

There is matter all around us in nature and the most amazing thing to notice is that not all matter act or respond the same way if they are put under similar conditions, this is due to the fact that matter is made up of basic component known as an element, an element is the most basic and purest form of any matter and the matter is made of up these elements. Matter can either be present in its pure form when only one type of element is used to form the matter, or it can be the combination of two types of elements. Elements are not all same types, but they are of three different types, this is the reason why they react differently under similar conditions. Let’s learn in more detail about the types of Elements.

Elements are substances that can not be broken into smaller substances further, they are already present in their purest form without any adulteration of impurity. Elements are the fundamental material that is combined to form matter. For example, Iron, Helium, Oxygen, Sulphur, etc.

Elements can be divided into two types:

Metals are described as those elements that lose valence electrons in order to create a positive charge, known as cations. They are the reason for the conductivity of metals. Metals are described as those substances that have the properties like malleability, ductility, sonority, lustre, conductivity, and they are mostly solid in nature. Some Examples of metals are, Iron, Gold, Silver, Aluminium, Copper, etc. 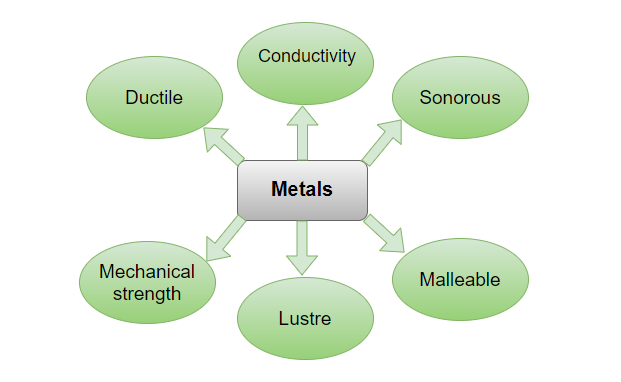 Non-metals are those elements that are not able to produce electricity or have conductance nor do they produce heat, these elements are the opposite of metals. The properties of non-metals include non-lustrousness, non-sonorous, non-ductile, non-malleable and poor conductor of heat and electricity. They are structurally brittle in nature and can be used in rolling, pressing, moulding, etc. Some examples of non-metals are Carbon, Oxygen, Nitrogen, Arsenic, etc. 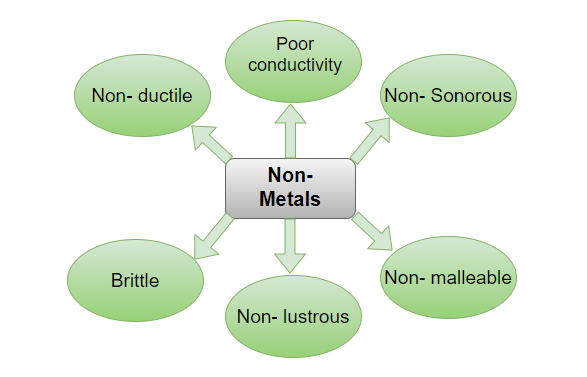 Question 1: Which metal is the best conductor of electricity?

Silver is the best conductor of heat and electricity.

Question 2: Which Element is used in the instrument which is used to measure temperature? State one distinguishing property of the elements.

Mercury is used in the instrument (thermometer) which is used to measure temperature. Mercury has one different property as a non- metal, that is, it is naturally present in liquid state.

Question 3: Why Silver is not used in making electric wires even after being the best conductor of electricity?

Silver is not used as electric wires even after being the best conductor of electricity because silver is not present in abundance on earth, which makes it one of the precious metals found on earth. Using silver as electric wires will be very costly and the wires can be easily stolen as well.

Iron is necessary for human body, it is present in the Red blood cells, the red pigment of the red blood cells is due to the presence of iron, it is known as Hemoglobin.

Question 5: Which element is used for preserving food? Is it a metal or a non-metal?

The element used for preserving food items is Nitrogen. Nitrogen is a non-metal.