What is a Proton? Definition, Discovery, Characteristics

The electron was discovered using a cathode ray tube.  An electric current was passed from the cathode (the negative pole) to the anode (positive pole). Several experiments showed that particles were emitted at the cathode and that these particles had a negative charge. These experiments demonstrated the presence of electrons. if cathode rays are electrons that are given off by the metal atoms of the cathode, then what remains of the atoms that have lost those electrons?

We know several basic things about electrical charges. They are carried by particles of matter. Millikan’s experiment showed that they exist as whole-number multiples of a single basic unit. Atoms have no overall electrical charge, meaning that each and every atom contains an exactly equal number of positively and negatively charged particles. A hydrogen atom is the simplest kind of atom with only one electron. what if that single electron gets removed from hydrogen the leftover part of the atom is just a positively charged particle. 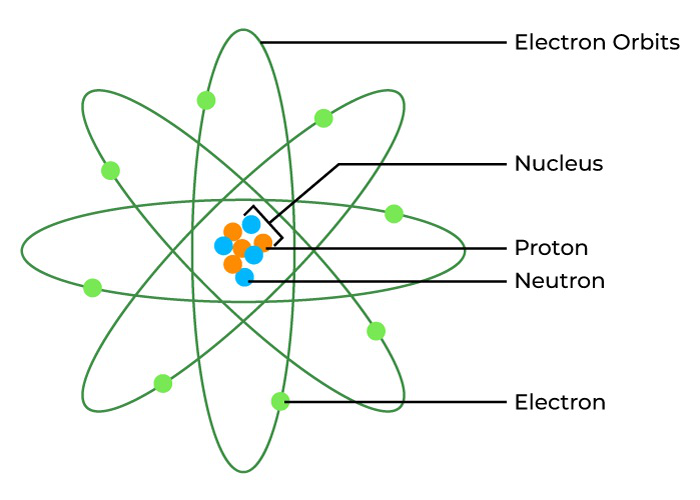 Electric charge is a property of certain particles, such as electrons(-), protons(+), and quarks (yes, quarks) that describes how they interact with each other. There are two different types of electric charge, somewhat arbitrarily named positive and negative (much like the four cardinal directions are named north, south, east, and west).

In 1886 Eugene Goldstein (1850–1930) discovered evidence for the existence of this positively charged particle. Using a cathode ray tube with holes in the cathode, he noticed that there were rays traveling in the opposite direction from the cathode rays. He called these canal rays and showed that they were composed of positively charged particles.

The nucleus of the atom was discovered by Ernest Rutherford in the year 1911 in his famous Gold foil experiment. He concluded that all the positively charged particles in an atom were concentrated in a singular core and that most of the atom’s volume was empty. He also stated that the total number of positively charged particles in the nucleus is equal to the total number of negatively charged electrons present around it. To support his theory he performed a famous experiment known as the Gold foil experiment.

Rutherford, in his experiment, directed high-energy streams of α-particles from a radioactive source at a thin sheet (100 nm thickness) of gold. In order to study the deflection caused to the α-particles, he placed a fluorescent zinc sulfide screen around the thin gold foil. Ernest Rutherford selected a gold foil for his experiments because he wanted as thin a layer as possible, and gold is very highly malleable.

Characteristics of a Proton

Problem 1: In the Rutherford experiment why do most of the alpha particles go straight through the foil?

Most of the alpha particles go straight through the foil in the Rutherford experiment because most of the part of the atom is empty.

Problem 2: Which type of radiation was used in Rutherford’s experiment?

The α particle was bombarded on thin gold foil and observed that the nucleus occupies a very small portion of the atom.

Problem 3: Which metal did Rutherford select for his α-particle scattering experiment and why?

Because gold is the most malleable metal and can be hence beaten down to get very thin sheets. The sheet of gold foil Rutherford used was only 1000 atoms thick. Gold’s malleability made it possible for it to be beaten down to such a thin sheet.

Problem 4: What is the relative mass and charge of a proton?

Problem 5: Who is the father of Proton and who found the proton?

Ernest Rutherford is the father of Proton, who discovered the proton in his famous experiment with gold foil in 1909.

Problem 6. What is inside a proton?

The proton, one of the atomic nuclei parts, consists of basic particles called quarks and gluons.