What is a Melting Point?

The matter is characterised by different states. There can be a transition from one state of matter to another. For instance, a solid can be transformed into a liquid and a liquid can be changed into a gas. For example, most of the solid metals, transform into liquid on heating and turn into vapour on further heating.

The change in matter state, for instance, from solid to liquid state occurs because of the following two characteristic factors :

Conversion from solid to liquid

The process of a solid turning into a liquid state is called melting. It is also known as fusion. The reverse process of a liquid becoming a solid, is in turn called solidification.

The temperature at which melting occurs for any pure substance is termed the melting point of that substance. It is considered to be a characteristic of that substance. Energy is required by the system to carry out the melting of a solid to a liquid. It is an endothermic reaction. Every pure substance requires a certain amount of energy which is required to change from a solid to a liquid state.

Energy is exclusively required to carry out the transition of the substance, from the solid to the liquid substance. The phase of a substance is changed, and the temperature remains unchanged. Therefore, melting is known to be an isothermal process, since the substance remains at the same unmodified temperature.

Melting or fusion is the process by which a solid substance changes into a liquid on heating. On heating a substance, the particles vibrate with greater intensity and move more vigorously. Heat energy is produced. The particles gain sufficient kinetic energy to overcome the strong forces of attraction. They gain energy to break through to form small groups of particles. Solids, therefore, melt to form a liquid state.

Melting of a substance occurs at defined ambient pressure conditions. The energy supplied to melt a system is known as enthalpy of fusion or entropy of fusion. However, some of the substances pose an exception to this process, and heat has to be removed from these systems in order to melt them. e.g. Helium.

What is Melting Point?

The temperature at which a solid substance melts and transforms into a liquid at atmospheric pressure is termed the melting point of a substance.

At the melting point, the solid and liquid states of matter coexist together. The melting point of a substance is its characteristic property influenced by the applied pressure.

The application can be observed during the process of snow skating. The weight of the skater gets concentrated on a thin line, there is considerable pressure applied on the ice slab. This results in the melting of ice beneath the shoe of the skater. This melting ice lubricates the undersides of his skating shoes. This makes it possible to skate on the ice. 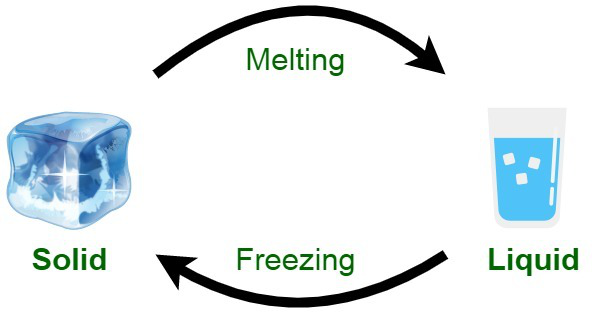 Heating Curve for the Conversion of Solid to Liquid

The heating curve denotes the temperature on the y-axis and the heat that has been supplied on the x-axis respectively. Let us assume a constant rate of heating, owing to which the x-axis can be shown as the amount of time which is shown as the substance is being heated. The curve majorly shows two main points: 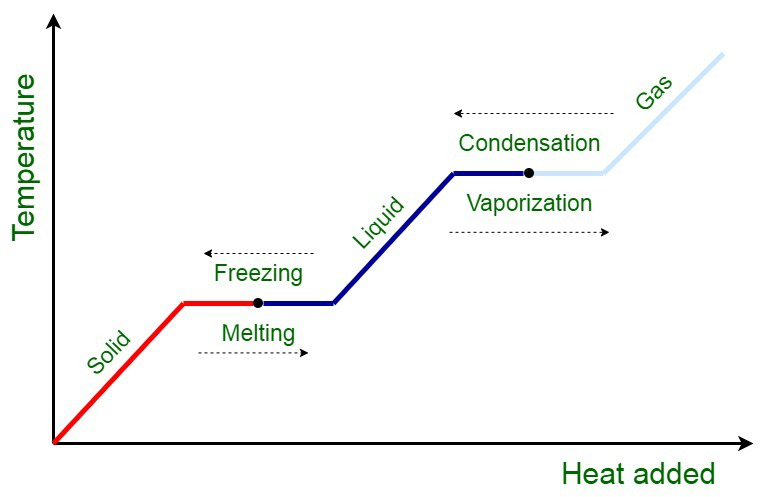 Question 2: Does temperature change during the process of heating ice?

As we constantly supply heat energy to transform ice into water, the temperature of the system doesn’t change. The heat energy is absorbed by the ice changing slowing into the liquid state. Both the states of matter coexist together during this process.

Question 3: How does melting occur in the case of amorphous solids?

The non-crystalline solids, such as glass or pitch undergo melting by slowly decreasing viscosity with the simultaneous increase in the temperature. However, there is no sharp transformation from solid to liquid state.

The amount of energy required by a pure substance to change from the solid to a liquid state is termed as the enthalpy of fusion (or heat of fusion) of the substance. It is denoted by ΔHfus.

Question 5: Differentiate between boiling or melting.

Boiling is the process of melting of liquid to gas state whereas melting is the transformation of solid to liquid state.

Question 6: How does energy change occur during melting?

Heat must be supplied to the enclosed system in order to simulate the melting of the substance. When energy is supplied the atoms composing the substance break away and are pulled apart farther.

Question 7: Which element has the highest melting point?

Tungsten is the element posing the highest melting point, 3,687 K which makes it suitable for making electrical filaments in incandescent lamps.